Although the U.S. Defense Department and North American Aerospace Defense Command have speculated publicly that the unidentified contrail of a projectile soaring into the skies off the California coast – and recorded by a KCBS television crew – came from a jet and posed no security threat to the U.S., several experts are raising provocative and disturbing questions about the government’s official response, reports Joseph Farah’s G2 Bulletin. 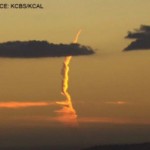 Two governmental military experts with extensive experience working with missiles and computer security systems have examined the television video and conclude the mysterious contrail originating some 30 miles off the coast near Los Angeles did not come from a jet – but rather, they say the exhaust and the billowing plume emanated from a single source nozzle of a missile, probably made in China.

They further suggest the missile was fired from a submerged Chinese nuclear submarine off America’s coast, and point out that the timing of the alleged Chinese missile shot coincided with an increasing confrontation between the U.S. and China, and was likely meant to send a message to Washington.

Indeed, the Federal Aviation Administration documents that there were no aircraft flying in the area at that time, the night of Nov. 8.

“The question that still must be answered is why NORAD’s muted response was simply that North America was not threatened, and later our government approved the lame excuse that the picture recorded was simply an aircraft leaving a contrail,” said retired U.S. Air Force Brig. Gen. Jim Cash.

A former U.S. Air Force fighter pilot and commander of an F-15 squadron and an F-16 wing, Cash was assigned to NORAD as an assistant director of operations at the Cheyenne Mountain complex near Colorado Springs, Colo., and is fully knowledgeable of NORAD procedures.

“There is absolutely no doubt that what was captured on video off the coast of California was a missile launch, was clearly observed by NORAD, assessed by a four-star general in minutes, and passed to the president immediately,” he said.

Even more ominously, cautioned Cash: “We must question the timing of this shot across our bow. The president was abroad being diplomatic, which means trying to placate China which is becoming overly concerned with our handling a totally out-of-control deficit in spending.”

Wayne Madsen, a former naval officer who has worked at the National Security Agency and the Naval Data Automation Command, said the inability to pick up what he described as a Chinese Jin-class submarine-launched ballistic missile isn’t the first time U.S. Navy anti-submarine warfare sensors have failed.

Madsen, who today is an investigative journalist, said the Pentagon is working “overtime with the media and on the Internet to cover up the latest debacle. However, even some reporters who cover the Pentagon full-time are beginning to question the Pentagon’s version of events … over the skies west of Los Angeles.”

Dr. Lyle J. Rapacki of Sentinel Intelligence Services, LLC, said the contrail incident off the Los Angeles coast is “fraught with peril” due to the defense systems and protocols in place that should have detected the alleged submarine.

“The decision to officially announce that North America was not threatened,” he said, “and all the excitement was due to an aircraft leaving a contrail is a decision that reaches beyond the four-star general level and goes directly to a decision made by the commander-in-chief.”

G2Bulletin calls to the Pentagon and NORAD for comment beyond previous official statements were not returned.

Bernanke’s Speech Made It Clear Sell The Dollar Right Now

Citi's crack FX strategist Steve Englander reacts to Bernanke's big speech where he slammed China, and concludes that Bernanke is...