During the 1950s and 1960s, the United States was the richest and most envied country in the world. It was also unrivaled as the world’s manufacturing powerhouse. Americans proudly regarded their country is a model, and many people around the world agreed. 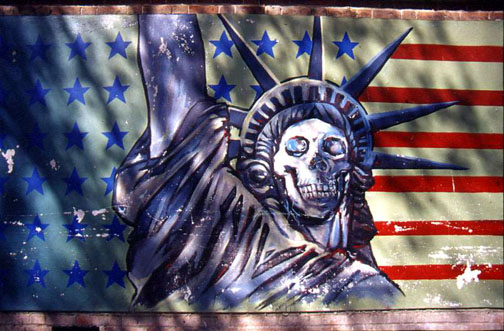 Today, the US is still the world’s largest economy and pre-eminent military power, and it’s still a country of great resources and wealth. But things have changed tremendously over the past half century.

More than ever before in our history, the American people sense that something is very wrong in our country. They are concerned about rising social-economic inequality, an erosion of national identity and purpose, increasing social polarization, and growing contempt for the US around the world.

Polls show that, as a long term trend, ever more Americans think that the US is “on the wrong track, and that this country is “in a state of decline.” Surveys also show that Americans now believe that life for their children will be less prosperous and secure than it has been for them.

A popular song of the 1960s, “California Dreamin’,” had the line, “I’d be safe and warm, If I was in LA.” Los Angeles is still warm, but these days LA County is home to more than thirteen hundred criminal street gangs with 150,000 members. In one recent ten year period, the toll of lives taken by these gangs was nearly six thousand killed. That’s more than the number of Americans who lost their lives in the Nine Eleven attacks of 2001, and in the Afghanistan war — combined.

No one in the world today looks to Los Angeles as a model city. In listings of the world’s top 15 “quality of living” cities, not one is in the US. In survey after survey, this country’s place in global ratings of quality of life has been slipping. Likewise, the US has been steadily falling behind in education, engineering, science, and basic literacy.

During the 1950s and 1960s, California had one of the nation’s best educational systems, with an enviable network of quality elementary schools. Today the achievement level of California schools is near the bottom for the entire United States.

Just a few decades ago, the US was the world’s premier creditor nation. Today it’s the number one debtor nation.

Perhaps most alarming of all, Americans now see the US rapidly becoming an unrecognizable `third world’ country.” This is due, above all, to the dramatic transformation of the racial-ethnic character of this country’s population, a change that’s the result of large-scale immigration from non-European countries, especially Mexico, and a birth-rate among Americans of European origin that has fallen below the replacement level.

Demographics, they say, is destiny. In 1950, every state and every major city in the US still had a majority European-origin population. Today four states — including Texas and California, the most populous — and most of our major cities have majority “minority” populations.

This change has been especially dramatic here in southern California. It’s no exaggeration to say that over the past half century, this region has been transformed more fundamentally than Poland, Hungary and other eastern European countries changed during nearly 50 years of Soviet Russian occupation and domination.

The great demographic trends in our country are forcing — year by year — dramatic changes in our culture, our politics, our educational level, our economy, and our quality of life.The comfortable, proud and confident America of the 1950s and 1960s is gone — gone forever.

To imagine that California might return to what it was in 1960 is about as realistic as to imagine that Alaska will once again be Russian, or that Louisiana will return to being French.

In this situation, a failure of political and cultural-educational leadership has brought an unprecedented breakdown of trust. Nothing better underscores this erosion of trust than the Iraq war fiasco. In the months leading up to the US attack against Iraq in March 2003, government officials and much of the media — as we now know — deceived the public with alarmist falsehoods to justify the invasion and occupation of that country.

Americans are understandably fed up with political leaders who deceive and mislead them. They feel betrayed by politicians who support costly and destructive wars that do not serve authentic American interests, who refuse to halt the massive influx of illegal immigrants, and who approve immense government spending on programs we cannot afford, thereby imposing an irresponsible burden of debt on our children.

And, with each passing year, it is ever more obvious that the leaders of both major parties pander to the powerful lobbiest– thereby betraying the principles of the nation’s founders, as well as the interests of our people.

Distrust has become so deep and widespread that many Americans look to Sarah Palin as a source of hope for the future. Millions regard her simplicity and lack of sophistication as reassuring attributes of a “plain folks” person like themselves — a person who, they hope, is therefore more trustworthy and able to understand and represent their interests than the slick and educated politicians who, time and again, have betrayed their trust.

While politicians of both major parties loudly promise “change,” the blunt reality is that no establishment politician, no matter how eloquent or seemingly sincere, will alter the country’s basic direction. That’s because for many years America’s political, cultural and intellectual life has been systematically skewed to serve alien interests, and in accord with ideological principles that are divorced from reality.

In our motion pictures and television, in classrooms and textbooks, and in government, powerful interests have — for their own self-serving reasons — imposed a false and harmful portrayal of society and of history. As a result, our nation can neither understand itself nor direct its sight clearly toward the future.

America today is a society in denial.

The country’s political, cultural and intellectual leadership — both liberal and conservative — denies social reality and ignores the historical record, and therefore inevitably betrays the interests of the people, leading America down a path that means ever greater anxiety and ever more rapid decline.

The leadership of both major parties, along with the mainstream media and the educational establishment, support and relentlessly promote an egalitarian-universalist ideology, an outlook of wishful thinking divorced from reality that refuses to acknowledge the most elementary truths of society, of heredity, and of history. In accord with our leaders’ illusory principles and unrealistic policies, American society is rapidly becoming ever more confused, divided and disordered.

Whether Republican or Democrat, our political leaders lack candor, an informed view of history and the world, and a reality-based vision of the future.

But somehow, and contrary to the ideological outlook of “limited government” conservatives and libertarians, such “big government” nations as Norway and Denmark are consistently at or near the top of the most desirable countries to live in, while the “small government” countries of the world, many of them in sub-Saharan Africa, are among the least desirable places to live.

A society based on an ideology of denial, falsehood, wishful thinking and self-deception cannot be saved. In fact, it does not deserve to survive.

There is no better and more important example of the entrenched denial and lack of reality in our society than the refusal of our political leadership, and of those who run our mass media and our educational system, to confront, or even to acknowledge, the enormous power of the organized.

That’s why the work of the Institute for Historical Review is important.

What we accomplish depends on support from men and women like you who understand what’s at stake, and who care about justice, truth, our nation, humanity and our common future.

Although the U.S. Defense Department and North American Aerospace Defense Command have speculated publicly that the unidentified contrail of a...