The first civilian trial of a Guantanamo prisoner ended as a failure Wednesday with the stunning acquittal of an accused Al Qaeda terrorist on all but a single count, he was one count away from being let free to walk. 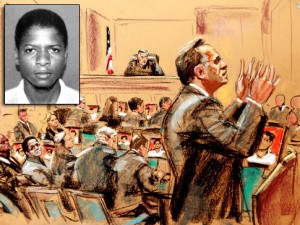 A federal jury convicted Ahmed Ghailani, 36, on one count of conspiring to destroy U.S. buildings and property in the 1998 bombings of U.S. Embassies in Kenya and Tanzania that killed 224 people, including 12 Americans.

But – after 41/2 days of deliberation – the panel cleared Ghailani of more than 280 other counts, including the top charges of murder and murder conspiracy.

Even though he faces a mandatory 20-year-to-life sentence for the conspiracy conviction, Ghailani appeared relieved, hugging his lawyers after the verdict was read in Manhattan Federal Court.

The Justice Department was muted in its reaction. “We respect the jury’s verdict and are pleased that Ahmed Ghailani now faces a minimum of 20 years in prison and a potential life sentence,” the department said in a terse statement.

“He will face, and we will seek, the maximum sentence of life without parole when he is sentenced in January,” U.S. Attorney Preet Bharara said.

Rep. Pete King (R-L.I.), who has been a staunch opponent of such trials, called the mixed verdict “a disgraceful miscarriage of justice.”

“It shows how totally wrong the Obama administration is to bring a case like this to civilian court,” he said. “He was acquitted of 224 counts of murder.”

The case underscores the challenges faced by prosecutors. Judge Lewis Kaplan barred a key witness from testifying because the man’s name came to light while Ghailani was held at a CIA camp where suspects reportedly were tortured.

“If this had been before a military tribunal, evidence that was blocked in this case would have been admissable,” King was quick to point out.

Edith Bartley, who lost her father and brother in the Kenya bombing, was stunned Ghailani was cleared on any charges.

“This man committed horrible acts, and the fact that the jury found him guilty of conspiracy but not of the other counts is mind-boggling,” she said. “He should be sentenced to life.”

The day before the 1998 bombings, Ghailani fled Africa with a one-way ticket to Pakistan, using an alias, prosecutors said. While on the run, he spent time in Afghanistan as a cook and bodyguard for Osama Bin Laden and later as a document forger for Al Qaeda, authorities said.

He was captured in 2004 in Pakistan and held at a secret CIA camp overseas. In 2006, he was transferred to Guantanamo and held there until last year.

The defense argued that Ghailani was a “dupe” who was kept in the dark about the plot. It called no witnesses to testify on his behalf in the month-long trial.

In Case You Missed It:  EXCLUSIVE – ANDREW WEISSMANN PART XIV: “A Desecration of a Prosecutor… Has Disgraced Every Single Ethical Tenet that Prosecutors Hold Dear” – Rudy Giuliani on Weissmann
Posted in Terrorism, Tyranny and tagged al-Qaida, Islam, Muslims, Obama, Terrorism.

Obama’s New START Would Have Been Reagan Non-Starter

In his last gasp effort to rush his New START agreement with Russia through the Senate, President Barack Obama again...