Just because the duck is lame doesn’t mean it can’t still do terrible damage to American freedom. Our new Congress, especially the new House, isn’t yet seated, and this current Congress can still wreak terrible havoc on our rights if not stopped. 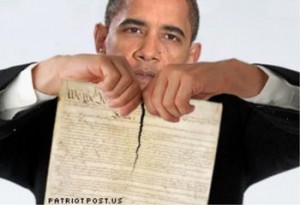 Case in point: Senate Bill 510, believed to be coming to the floor Wednesday, November 17 (pending). This is the food safety version of ObamaCare. Reading the thing will make your head hurt for all its cognitive dissonance. Trying to winnow out its complexity and hidden empowerments is stultifying.

Introduced by Dick Durbin of Illinois, the bill has moved through the usual phases of amalgamation and deal-making. The monstrosity advancing to the floor on Wednesday is not so much “food safety” as it is the decadence of the rights of small farmers, hobbyist food producers, garden-variety farmers markets, and your average small producer of foodstuffs. Under the rubric of safety, this Senate proposes a bill that establishes such new and sweeping powers over how you and I produce and consume foodstuffs that even the Pew Charitable Trusts * are calling S510 a clear and present danger. National Health Freedom says,

It is a dangerously broad regulatory bill giving extensive discretionary power to the FDA over the entire food supply chain without proper checks and balances to avoid abuse of power;

It would impose one-size-fits-all-regulations on thousands of small and mid-sized farmers, small-scale local farms and food producers, and would drastically burden, to extinction, basic natural and organic food suppliers, thus endangering the lives of Americans who depend on local wholesome foods;

It does not reflect a well-thought-out solution, or address the real causes of food safety issues stemming from the industrialized food supply chain; and

It attempts to limit the authority of our own domestic U.S. laws when it includes language ensuring that our US law will not disturb other international agreements that we have made. It states: “Nothing in this Act shall be construed in a manner inconsistent with the agreement establishing the World Trade Organization or any other treaty or international agreement to which the U.S. is a party.”

The concern for freedom and health freedom advocates with the legislation, and the NHF’s concern, is not because it addresses existing conventional food safety system problems, tainted imported foods, peanut butter… et.al. but because of these non-conventional food safety attempts to expand FDA authority and impose more controls over the marketplace and the access to nutritional foods and supplements.

(d) SMALL ENTITY COMPLIANCE POLICY GUIDE.- Not later than 180 days after the issuance of the regulations promulgated under subsection (m) of section 418 of the Federal Food, Drug, and Cosmetic Act (as added by subsection (a)), the Secretary shall issue a small entity compliance policy guide setting forth in plain language the requirements of such section 418 and this section to assist small entities in complying with the hazard analysis and other activities required under such section 418 and this Section.

Neither specified nor even alluded to is the empowering language of what “assist” or “hazard analysis” or “small entities” may mean. In federal empowerment legislation, this means whatever they want it to. Lee Bechtel goes on to write,

There is no legislative language that gives any clarity or defines what a “small entity” is. Instead, leaving it up to the FDA to decide the application of the law. The Senate bill unlike the House version does not include specific exemption language for small farmers, small organic farms, etc. In fact, Senator Testor has an amendment to address this matter, if the Democratic Senate leadership allows it to be offered.

Further, how about this for a TSA-brand of intrusion into your affairs? Pg. 3 of the Manager’s Amendments to S510 –

(2) USE OF OR EXPOSURE TO FOODS OF CONCERN.-If the Secretary believes that there is a reasonable probability that the use of or exposure to an article of food, and any article of a food, that the Secretary reasonably believes is likely to be affected in a similar manner, will cause serious adverse health consequences or death to humans or animals, each person (excluding farms and restaurants) who manufactures, processes, packs, distributes, receives, holds, or imports such article can be acted upon by the FDA.

That would be you and me, if we’re hobby farmers at the local farmer’s market.

If accepted [S 510] would preclude the public’s right to grow, own, trade, transport, share, feed and eat each and every food that nature makes. It will become the most offensive authority against the cultivation, trade and consumption of food and agricultural products of one’s choice. It will be unconstitutional and contrary to natural law or, if you like, the will of God.

You know by now that the real dangers of federal legislation are hidden in a root-cluster of treaties, acts, bills, agreements, resolutions, and other governmental legerdemain that disguises the facts. Like with a metastasizing cancer, you have to run down all the tentacles that get back-doored and de-facto empowered rather than focusing just on the prima facia. Or, as Dr. Daniel Geer, Sc.D. says, Complexity is the enemy of security.

S510 puts all U.S. food production under the control of the Department of Homeland Security. And the Department of Defense. We lose not only private-citizen control of our food supply, but sovereignty as well. The bill sets in motion standardization of the food animal supply chain, focusing on eliminating biodiversity in food animal genetic stocks. It further mandates that the federal government control and empower hormonal, genetic, and antibiotic additions to our food supply while postponing most definitions of what will constitute “food crimes” under the bill’s sweeping and generalized powers.

Remember Nancy Pelosi’s infamous “we’ll know after we pass it”?

You may be disposed to embrace a genetically modified, enhanced, and altered food chain, but for those of us who eat our foods unadulterated, raised naturally, and without benefit of the federal government mandating what we can and can’t eat, S510 is one more giant step toward consolidating total power over the lives of free citizens. It is standardization on a scale never seen. Remember Ireland and its potato famine. That’s what standardization accomplishes. One bug killed an entire economy.

This bill constitutes some of the worst of the worst of corporatist policies favored by the political class controlling our federal government. Conservatives must rebel at any sign of government intrusion into our private affairs, and criminalizing private food production is as wrong as it gets. S510 does just that, if reading between the lines of its muddy language suggests where the lame duck Pelosi-Reid Congress is headed. If implemented, S510 can define as a crime to clean, store, and own seeds or seed stocks unless granted that right by the federal government. Think you’ll be granted that “right” when arguing against Monsanto’s lawyers?

There’s plenty of inflammatory news, blog entries, and postings on the internet regarding S510, and you’ll find most of it from sources you’ll consider Birkenstock-wearing greenies. So what? Read the bill. Follow the trail of what this bill embraces through the WTO, ending the 1994 Uruguay Agreements. Follow the failed Clinton money through Burson Marsteller (the giant public relations firm) and on through the empowerment of vague definitions within. And if you can read far enough on the faint trails of treaties, past legislations and acts, you’ll realize that the federal government, under successive attempts by the corporatist Left, is grabbing not just your health care, but your food supply.

Its House companion Bill, HR 2749, empowers federal bureaucracies to totally prohibit the movement of any and all foods into or out of a given area (Section 133b, “Authority to Prohibit or Restrict the Movement of Food,” sponsored by Congressman Dingell). Sure, sure, the idea may be to prevent the spread of dangerous foods, but once the camel’s nose is under the tent, you know what can happen.

In other words, what are Republicans doing, signing on to legislation so grievous to the rights of the citizens they are sworn to protect?

Erik Olsen of the Pew Health Group informs us that Pew strongly supports S.510. who speaks in support of the measure. The characterization of Pew’s stance on S.510 is incorrect and we regret the error.

Don’t Tread On Me! What it Means for Foreign Policy

The bold letters of the Gadsden Flag have become the slogan of America’s 21st century Tea Party movement and a...