US special forces fought side by side with Pakistani soldiers and the government in Islamabad privately approved drone strikes while publicly condemning the CIA’s covert raids, according to the Wikileaks diplomatic cables. 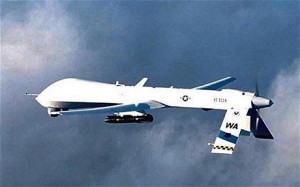 The revelations of America’s secret war in Pakistan will deeply embarrass President Asif Ali Zardari who has long denied such deep co-operation with Washington for fear it would embolden Islamist opposition to his feeble government.
In public, both sides have described putting American boots on the ground as a red line issue. However, a cable sent by the then US Ambassador to Islamabad, Anne Patterson, states that Pakistan has twice requested American soldiers to embed with its Frontier Corps in North Waziristan and South Waziristan, areas dotted with Taliban and al-Qaeda bases.

On both occasions Pakistan asked for the help of US special forces to provide intelligence, surveillance and reconnaissance – including video footage from drones – to its troops. On one mission they helped the Pakistani soldiers target an enemy base with artillery.

“These deployments are highly politically sensitive because of widely-held concerns among the public about Pakistani sovereignty and opposition to allowing foreign military forces to operate in any fashion on Pakistani soil,” she wrote.
“Should these developments and/or related matters receive any coverage in the Pakistani or US media, the Pakistani military will likely stop making requests for such assistance.”

A second cable describes a 2008 meeting with Syed Yousaf Raza Gilani, Pakistani prime minister, in which he brushes aside concerns about the use of Predator drones against targets in the tribal areas and gives an insight into how he would deny any co-operation. “I don’t care if they do it as long as they get the right people. We’ll protest in the National Assembly and then ignore it,” he told Ms Patterson.

There have been more than 100 drone strikes so far this year as the Obama administration steps up its covert use of Predators in the skies over Pakistan. Publicly, Pakistan has insisted the strikes are “unhelpful” while America has refused to confirm the existence of the CIA programme, despite the visibility of strikes.

The secrecy has spawned a generation of conspiracy theorists and provided the local media with countless stories of CIA plots, US border incursions and Blackwater operatives at large.

Hasan Askari Rizvi, a Pakistani analyst, said the latest revelations would be deeply damaging to a government which lacked the strength to articulate its true relationship with Washington, for fear of angering the country’s hardliners.

“There is no doubt this will fuel anti-Americanism and will encourage the Islamists and the conspiracy theorists,” he said.
The Pakistani government has dismissed the Wikileaks claims.

A spokesman for Mr Gilani said: “Our Prime Minister has made a very clear statement questioning the authenticity of these documents. There’s nothing more to say.”

by Gil Ronen Documents leaked and published on the Wikileaks website show that several Arab leaders are very anxious for...