Today, representatives of Iran and the P5 + 1 (the five permanent members of the U.N. Security Council plus Germany) convened for talks on Iran’s nuclear program in Geneva. 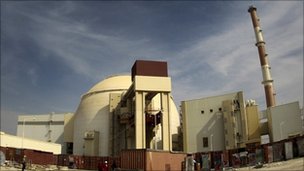 These are the first face-to-face talks on that subject for 14 months. Iran’s unpredictable regime broke off talks last year after initially accepting “in principle” a nuclear deal that would have sent much of Iran’s stockpile of low-enriched uranium out of the country in exchange for more highly enriched uranium to fuel the Tehran research reactor.

This time around, Western diplomats have lowered their expectations about gaining any concrete results. The defiant Iranian regime has signaled that it is determined to continue its uranium enrichment activities despite four rounds of U.N. sanctions. The day before the meeting in Genev,a the head of Iran’s Atomic Energy Organization, Ali Akbar Salehi, announced that Iran would use domestically produced uranium concentrates, known as yellowcake, for the first time, thereby cutting its reliance on imports of uranium for nuclear fuel. Salehi claimed that “this means that Iran has become self-sufficient in the entire fuel cycle.”

Iran’s unscrupulous regime has often lied about its nuclear program and exaggerated the progress it has made. The latest announcement was undoubtedly timed to strengthen Tehran’s negotiating leverage at Geneva.

A White House spokesman indicated that the Iranian announcement was not a surprise since it had been trying to develop an indigenous program for years, but pointed out that the regime’s claims that Iran was interested solely in nuclear power were undermined by the fact that Iran’s uranium supply was inadequate to fuel a nuclear power program and “this calls into further question Iran’s intentions.”

Iran’s intentions were made clearer on Friday, when Foreign Minister Manouchehr Mottaki reportedly snubbed Secretary of State Hillary Clinton at a conference in Manama, Bahrain. Mottaki ignored a personal greeting from Clinton, despite the fact that she had delivered a soft message in a speech, saying that the Obama Administration remains committed to engaging Tehran and respected Iran’s right to civilian nuclear power so long as it could be sure that Iran was not seeking a nuclear weapon.

The Geneva talks are likely to be at least as frustrating for the Obama Administration as Clinton’s experience in Bahrain. Tehran has a long history of cynically using diplomacy to undermine the prospects for more sanctions and to drive a wedge between members of the international coalition that seeks to restrict its nuclear program. Get ready for more “Rope-a-Dope” diplomacy as Iran’s intransigent regime seeks to buy more time for advancing its nuclear ambitions.

Report: Clinton and Obama Pulled ‘Bait and Switch’ on Netanyahu

As Israel waits for a letter clarifying America's guarantees in exchange for a proposed building ban for Jewish residents of...