RIYADH: Saudi Arabia might be an ultra-strict Islamic society, but princes’ mansions in Jeddah hide a buzzing party scene replete with alcohol, drugs and sex, according to a leaked US diplomatic memo. 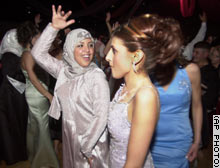 “Behind the facade of Wahabi conservatism in the streets, the underground nightlife for Jeddah’s elite youth is thriving and throbbing,” said the November 2009 cable, released by the WikiLeaks website.

“The full range of worldly temptations and vices are available — alcohol, drugs, sex — but strictly behind closed doors,” it said.

“This freedom to indulge carnal pursuits is possible merely because the religious police keep their distance when parties include the presence or patronage of a Saudi royal and his circle of loyal attendants.”

The cable, from the US consulate in the Red Sea city, described a Halloween party attended by 150 people mostly in their 20s and 30s, including consulate personnel.

“The scene resembled a nightclub anywhere outside the kingdom: plentiful alcohol, young couples dancing, a DJ at the turntables, and everyone in costume.”

Big Jeddah parties, also often attended by prostitutes, are a recent phenomenon, according to the consulate.

One Saudi told the consulate that wealthy locals try to throw parties at princes’ homes or with princes in attendance so that the religious police can be kept away.

It also said that the high price of smuggled alcohol, a bottle of Smirnoff vodka can cost 1,500 riyals, or 400 dollars, sometimes forces party hosts to refill original bottles with the harsh, locally bootlegged spirit sadiqi.

Producing and selling alcohol inside the kingdom can earn a person an extremely stiff jail sentence, and drug trafficking is punishable by death under the kingdom’s strict interpretation of Islamic sharia law.

In light of reports that Prime Minister Binyamin Netanyahu may apologize to Turkey for the flotilla incident of this past...