If you had plans to take a holiday in Greece, my advice would be to switch those plans. The following video is much more violent than protests we have seen in the past. Athens is looking more like a war torn city, also this week Riots in Moscow Russia over immigration concerns.  Riots on this scale could be coming soon to the United States. The video is shocking, imagine this happening in Washington D.C.

Greek unions grounded flights, kept ferries docked at ports and shut down public services today to protest wage cuts as the government sticks to conditions of an international bailout. Protesters clashed with police in Athens.

Air-traffic controllers walked off the job, canceling all flights to and from Athens International Airport. Public transport workers, whose salaries were cut 10 percent under a bill approved early today in parliament, worked on and off between 9 a.m. and 5 p.m. to carry protesters to rallies. 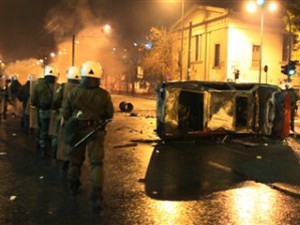 About 20,000 people heeded a call from the country’s two biggest union groups to protest in Athens, according to police estimates.  Protesters threw fire-bombs at officers deployed outside parliament and at the Finance Ministry in the center of the capital.  Police responded with tear gas and flash grenades.

Former transport minister Kostis Hatzidakis was attacked by protesters and led to safety after receiving cuts to the face, television footage showed.

“You can tighten your belt up to a point and then you reach a point where fiscal austerity is self defeating and I think they’ve reached that point,” said Diego Iscaro, an economist at IHS Global Insight in London. “Now they really have to concentrate on these kinds of measures.”

“Right now we have a common enemy, those who are in government, the IMF and the EU,” said Klapsis [a stationmaster at a suburban bus depot in the capital Athens for 31 years.] The IMF “wherever they pass through is scorched earth, the same as fire. They leave nothing behind,” he said.

Anyone who think Greece will pay back all of its debt obligations is not thinking clearly.  The same applies to Ireland, Portugal, and Spain.

In Case You Missed It:  Our Growing China Problem
Posted in Financial and tagged Debt Crisis, Europe, Greece, Riots.

Today on the Senate floor, John Kerry (D-MA) informed 15,304,498 voters from 16 states that their democratic voice is better...