Riots erupted on the streets of Rome as protesters failed to come to terms with the fact that Teflon-coated Berlusconi, 74, had scraped through by just three votes. 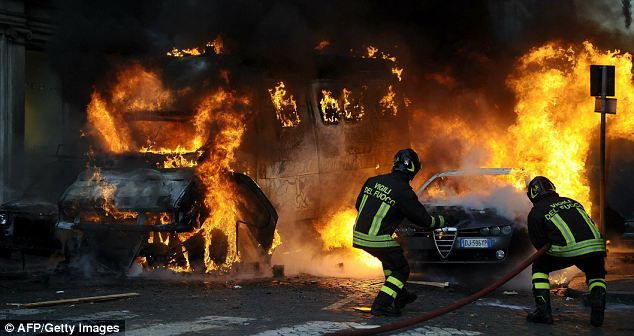 Inside the parliament chamber, ushers had to pull apart brawling MPs and members of the opposition claimed crucial votes had been ‘bought’ by his party’. An investigation has been already launched into the allegations.

After surviving the two votes, the first in the Senate and a second, closer one in the lower house, the media tycoon beamed – quickly accepting a congratulatory kiss from a blonde MP.

Brawling erupted between MPs belonging to Future and Liberty, the breakaway party formed by Berlusconi’s former ally of 14 years Gianfranco Fini, and those belonging to the Prime Minister’s People of Freedom party.

As his victory by 314 votes to 311 became clear, the violent scenes inside parliament were matched outside, where streets were closed off by armoured police vans as a ring of steel was thrown around the parliament building in the centre of Rome.

Following the disturbances 40 people were treated for minor injuries – three of them police – at one point an officer who was being attacked was seen to draw his gun as he was beaten to the ground by a mob.

The officer – serving with the customs police – was in a Rome hospital suffering from shock and bruising.

A source within the Customs police said: ‘He did not draw his weapon to fire it but to prevent it being taken by the rioters.

Witnesses said that the officer was pictured after he had lost his radio and his helmet.

‘An officer was attacked by several rioters and he was courageously defending his weapon – he did not use and had no intention of using it and he was eventually rescued by his colleagues.’
In 2001 protester Carlo Giuliani was shot dead by a paramilitary carabinieri police officer as he attacked his armoured car with a fire extinguisher during fierce riots at a G8 summit in Genoa.

Dozens of people were arrested and firefighters were called to deal with six burnt out vehicles in the Piazza del Popolo area including a police van, rubbish truck and four private cars which had been torched.

The famous square was a battleground and littered with tear gas shells, poles, bottles, bolts and chairs while shopkeepers who had been forced to pull down shutters as the riot erupted later emerged to clear the debris.

Christmas shoppers, tourists and school children were caught up in the violent scenes which lasted more than four hours with isolated skirmishes between protesters and police going on into the evening across Rome.

Violence was not just limited to the Italian capital with demonstrators clashing with police in Milan where the Stock Exchange was stormed and briefly occupied.

Rome’s right wing mayor Gianni Alemanno was booed by demonstrators as he arrived at Piazza del Popolo to see the damage and said:’Today Rome has been offended by unprecedented scenes of violence.

‘This gratuitous violence took place in the historic centre of the city, a UNESCO World Heritage Site, it is scandalous and no social or political motivation can excuse it.’

Tonight it emerged that the brawl in parliament between MPs broke out after a colleague of Ms Polidori from Future and Liberty had called her a ‘whore’ for voting with Berlusconi.

Berlusconi, who has faced 18 months of sleazy sex scandals and accusations of ineffective government during the economic crisis won the vote in the Senate by 162 to 135.

Political commentators said that, although Berlusconi had scraped through, the tiny majority would ensure him short term survival but did not bode well for the future.

As the double vote took place there were violent clashes outside with protesters hurling eggs, paint, firecrackers and metal poles at police in riot gear.

An estimated 50,000 crowd had descended on Rome made up of students, university researchers and unemployed who were joined with victims from last year’s earthquake in Abruzzo complaining that they still had not been housed.

During this morning’s vote in the Senate, anti sleaze senator Antonio Di Pietro accused Berlusconi of being ‘morally responsible for the crime of buying opposition MPs to help secure victory’.

As he spoke, Berlusconi walked out of the chamber with Di Pietro ridiculing him and saying: ‘That’s it run away. You have ridiculed Italy abroad and we are treated like a buffoon.’

After the vote marchers – many of them wearing ‘For Sale’ signs in protest at claims that Berlusconi had bought MPs – continued to clash with police throughout the centre of Rome.

Several banks were targeted by demonstrators with one branch having a road sign smashed through the glass and another having a cash point destroyed and windows broken.

Experts say that Berlusconi will now focus on winning the centrist UDC party in a bid to shore up his government and avoid elections which are not scheduled until 2013.

After the vote a jubilant Berlusconi said: ‘I told you, I knew Future and Liberty would split,’ in a reference to rebels within the breakaway Fini group who had backed him.

Twelve people have been hospitalized as a result of Ethnic riots in Moscow at night of December 15. News agencies...