(Reuters) – The mounting intensity of riots against higher university fees suggests that more and more ordinary people may be angry enough about austerity cuts to take to Britain’s streets in coming months. 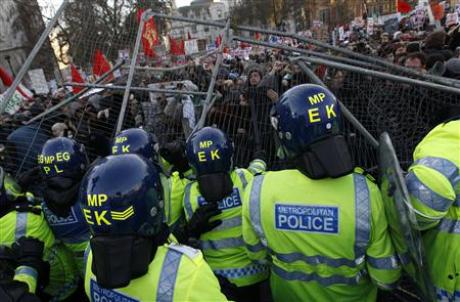 Thousands of students and others laid siege to London’s government district on Thursday, producing scenes of fighting, vandalism, horseback police charges and bloodied police and protesters not seen in Britain for years.

The chaos even affected the royal family, when a limousine carrying Prince Charles and his wife was attacked by rioters.

The government aims to almost triple tuition fees to up to 9,000 pounds, shifting the burden of paying for higher education from state to student as part of severe spending cuts intended to tackle a record budget deficit.

“If I were the government I would be very worried … I think the protests are going to grow. This is a government with a bit over six months in office and it’s confronting the most intense social protests for over 20 years,” said Alex Callinicos, professor of European Studies at King’s College London.

Analysts have begun to recall how a hugely unpopular local tax was scrapped after mass riots in London during a demonstration by 200,000 people in 1990, which also hastened Margaret Thatcher’s fall from power.

EFFECTS NOT YET FELT

Student fees are not seen as bringing down the Conservative-Liberal Democrat coalition, which took office only in May, and polls indicate that the public support the austerity drive in principle.

But the effects of the harshest cuts in a generation have only just begun to be felt.

Hundreds of thousands of public sector workers will lose their jobs and millions of Britons will have to scrimp as unemployment, child and housing benefits are slashed or capped.

Sales tax on many goods will rise from next year, many public services will be cut, and the retirement age will rise.

“In the abstract, everybody’s in favour of everybody else saving money. But when it’s your library, your hospital, that’s when you get mobilised,” said Patrick Dunleavy, professor of political science at the London School of Economics.

Stoking public anger now is the fact that the Lib Dems have gone back on a pre-election pledge not to raise tuition fees.

Some student leaders in London refused to condemn the violence, and many protesters said it was the only way their cause would be noticed.

The law raising tuition fees advanced in parliament on Thursday despite abstentions or ‘No’ votes from a number of government lawmakers.

But it still has a number of stages to go before becoming law, and students say their protests are not over yet.

“There are going to be a whole series of further actions, direct actions, further occupations, and I think in the new year we will see this rise ten-fold,” Clare Solomon, president of the University of London students’ union, told reporters.

Until recently, Britain’s students were seen as much less political, and militant, than those of earlier generations.

But many have spoken of campaigning for wider social justice, and making common cause with the trade unions, who are planning a mass demonstration in March. Some union representatives have also been present at the student rallies.

“There is a sense that people are beginning to feel that the coalition government has sold them a pup (deceived them), that the spending cuts aren’t the way forward and there is an alternative, and are beginning to protest about that,” said Paul Nowak, head of organisation for the umbrella Trades Union Congress.

The prospect of peaceful protesters mingling with increasingly agitated youths is a challenge for police, who failed to prevent the attack on Prince Charles’s car.

Their preferred tactic is “kettling,” in which groups of protesters are hemmed into a small area for hours at a time. Police say it limits the damage from violent protests, but students say it causes anger to boil over.

“Once you’ve got a fear of violence, police adopt tactics to try and stop the violence, and that causes the violence,” said Ivor Gaber, political journalism professor at City University London

Riot Breaks out on Streets of Rome

Riots erupted on the streets of Rome as protesters failed to come to terms with the fact that Teflon-coated Berlusconi,...