Christmas in Bethlehem: the cross banished from souvenirs.

For fear of Islamic fundamentalism, textile workshops in Hebron and Jerusalem, produce and sell T-shirts and other items depicting the Church of the Nativity without the cross. Discrimination and economic crisis are forcing Christians to flee from the Palestinian territories and Israel. The risk is to see a future without Christians in the Holy Land. Interview with Samir Qumsieh, director of the Catholic television station Al-Mahed Nativity TV in Bethlehem. 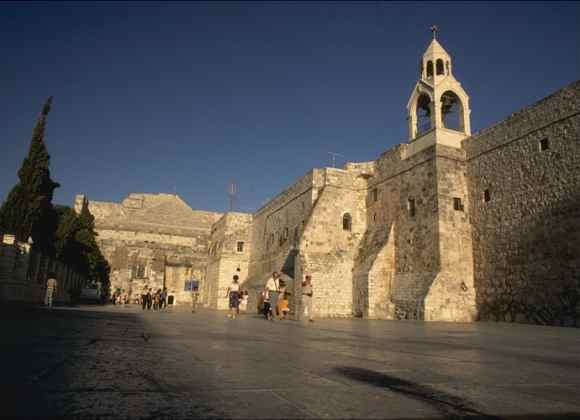 Bethlehem (AsiaNews) – This Christmas in Bethlehem, the cross has been banned from souvenirs for tourists and pilgrims in the Holy Land. Some textile workshops in Jerusalem and Hebron have begun to print and sell T-shirts depicting the Church of the Nativity in Bethlehem without the cross. Because of the growth of Islamic fundamentalism in the Palestinian territories, the cross was also removed from t-shirts of football teams. Interviewed by AsiaNews, Samir Qumsieh, journalist and director of the Catholic television station Al-Mahed Nativity TV in Bethlehem, said: “I want to launch a campaign to urge people not to buy these products – he says – because the removal of the cross is an intimidation against Christians, it is like saying that Jesus was never crucified. ”

Like every year, thousands including authorities, faithful and tourists from all over the world crowd, the Church of the Nativity in Bethlehem for midnight mass on the night of 24 December. It will be celebrated by the Latin Patriarch of Jerusalem and will be attended by the highest offices of the Palestinian Authority.

Qumsieh says that the population is living these days with joy, but the situation for Christians is still dramatic. According to the journalist, the dialogue of recent years between Muslims, Christians and Jews has not changed the situation.

“In the Holy Land – said Qumsieh – the emigration of Christians is growing, even if the authorities refuse to give precise numbers. Every day there are people who flee to other countries. As Christians, we live in a constant feeling of fear and uncertainty, and if you live in constant tension and pessimism you can not plan anything.

According to the journalist, “people leave because there is no work and movement is restricted under Israeli control.” Other factors are the internal problems of Palestine, such as the clash between Hamas and Fatah, which has repercussions on the economic situation. Qumsieh points out that from 2002 to 2010 the Christian population of Bethlehem has dropped from over 18 thousand to 11 thousand people. In Gaza, after Hamas came to power in 2006, Christians have fallen by about 3,200 units, from 5 thousand to less than 1800 in 2010. Only 15,400 Christians (2% of the population) live in Jerusalem, as reported in a study by the Jerusalem Institute for Israel Studies. They are 50% less than the 31 thousand registered residents in 1948, when Christians accounted for 20% of the population of the city.

Meanwhile, on the occasion of the celebrations for Christmas, the Israeli military has ordered troops deployed in the occupied Palestinian territories to facilitate the passage of Christian pilgrims at checkpoints. The military has also distributed a brochure explaining the importance of Christmas for Christians and is urging soldiers to avoid unnecessary discussions and obstacles at the borders with the West Bank.

In Case You Missed It:  DEATH BY VAX: Excess mortality up 17% among the fully vaccinated
Posted in Terrorism and tagged Censorship, Freedom, Islam, Israel, Muslims, Palestinians, Racism, Terrorism.

This strange weather phenomenon, which you will see in the video below, happened in Newfoundland where the waves were actually...