By Bill Warner– You can sort the written and spoken words about Islam into two categories — negative and apologist. Closer observation shows that the negative camp and the apologist camp use different logic, as well as come to different conclusions. 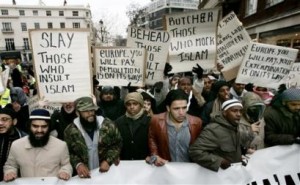 An easy way to see this is to go to a reporting source on the web, such as a newspaper, that has an article about Islam. Read the comments. The negative comments tend to be more based on ideas taken from the Islamic source material from the Koran and Mohammed. Or they quote a jihadi, a poll, or a historical fact.

The apologist comments tend to quote a Muslim friend or establishment expert and attack those who criticize Islam. Critics are called bigots, neo-Nazis, Islamophobes, or some other cruel name. In essence, having negative comments or judgments about Islam is labeled evil. The term “hate speech” is even bandied about. The critic of Islam is a failed sinner who is shamed and morally condemned. It is all very personal and very much about feelings.

A good apologist will have a second attack on the problem of “Is Islam good or bad?” Islam must be supported by something besides an attack on the person. There must be some facts about Islam from other apologists, mainly Muslim scholars and academic types. These experts are authorities who can deliver judgment from on high. But oftentimes, they don’t have facts — only opinions.

If you are to base your arguments on what some expert says, then which “expert” do you ask? What imam or what professor? If you quote a Jew-hating Saudi imam found on MEMRI (Middle East Media Research Institute), you fail the criteria of the expert the apologist needs, because the “expert” must be a moderate at all costs. So that fire-breathing Palestinian jihadi just won’t do.

If you turn to Google, you can wind up at sites like ReligionLink, a website for reporters. This looks very official, very authoritative; surely you can trust them. But if you are knowledgeable, you know that there are organizations on the site associated with the Muslim Brotherhood, such as ISNA, which should raise a flag to the informed.

It is interesting to take the ReligionLink site as an example of how the Islamic information war works. Go to what seems like a very solid choice of experts recommended on the site: a Naval Academy professor, Dr. Brandon Wheeler. Get his advice on Sharia law, and when you line up what he says against the current Muslim Brotherhood position on Sharia in America today, they match exactly. Dr. Wheeler says that Sharia is vague, not really law, an old idea, very adaptable, and no country really follows Sharia. Move along, there is nothing to see here, says the apologist professor peddling the Muslim Brotherhood line.

The facts are that as far as the Kafir is concerned, the Sharia is very clear. It is also unimportant that Sharia is not an exact analog to our laws. So far as being an old idea, the Koran and the Sunna are even older and held to be absolutely true. It is true that no nation uses the Sharia for 100% of its rule, but the law is so ruinous to women and Kafirs that any application of Sharia is not humane. And all 57 of the Islamic countries use it to some degree.

If you cannot trust a Naval Academy professor of Islamic Studies, then how do you evaluate the source of information? How can we know the true nature of Islam? Are there actual facts that nail everything down?

The Trilogy is not only an objective source of Islamic doctrine, but it is also the measure of all statements about Islam. We have an objective measure of experts. We don’t need to see what institute gave them the authority to speak as an expert. We need to compare their comments to what is in the Trilogy. If the comment agrees with Mohammed, it is true. If it disagrees with the Trilogy, then it is false.

The question is: why even ask the experts? Why not ask Mohammed and Allah and quote them? Quote the doctrine. Skip the experts and find an objective answer.

The problem is that no one knows there is objective knowledge about Islam. Everybody has been lied to by the media, the schools, the religious leaders, and all those who listen to opinions of experts and do not know a single objective fact about Islam (i.e., doctrine). We have a choice: learn about the Koran and Mohammed, or be the fools listening to a good lie told by “experts.”

TSA Has Its Security Priorities in the Wrong Place

There is absolutely nothing wrong with full-body scanners. In fact, the more we innovate and introduce new security technologies, the...