Refusing to face the need for radical change and adaptation only makes the eventual adjustment more traumatic and less likely to succeed.

As an initial reaction to unwelcome crises, denial serves a psychological purpose. Closing our eyes and hoping the Monster will go away is the first stage of eventual acceptance and engagement with unwelcome reality.

Clinging to denial sets up pathology, anger and collapse. If we continue to keep our eyes closed, and demand the Monster go away because we don’t want to deal with change and challenge, then we either detach ourselves from reality altogether (a pathological psychosis perfectly depicted in the classic film Sunset Boulevard) or we rage in fear and dread at the challenge/Monster, as if it is somehow unfair that change has occurred without our express permission.

The longer we close our eyes and hope the Monster will magically go away when we finally open them, the more likely our eventual collapse.

As a nation, two years after the demise of the status quo, we are still closing our eyes hoping the Monster goes away. Frequent contributor U. Doran recently sent me Hiding a Depression: How the Government Does It by Daniel Amerman, a blow-by-blow description of how Federal and state spending has expanded to replace the private-sector GDP which has vanished.

The article notes how this massive replacement of the private sector by Federal (borrowed) spending has gone largely unremarked.

In other words: if we close our eyes and borrow 10% of the nation’s GDP ($1.4 trillion) every year (or perhaps more accurately, $2 trillion a year) from now on, then when we finally open our eyes the Monster of change and challenge will have magically vanished and everything will be as it was before the Monster’s terrible appearance.

Yes, this is childlike. We have turned to the Central State as our Mommy and Daddy who will save us from the Monster.

Unfortunately, our own desires and derangements are feeding the Monster that is threatening us with change–a dynamic illustrated by the classic sci-fi film Forbidden Planet.

The more we cling to our deranged dependence on systemic fraud, exponential expansion of credit, corporate cartels/political Plutocracy, Central State largesse, corporate-media propaganda and a financial system that breathes misrepresentation of risk, the stronger the Monster becomes.

A close friend has been consulting for a long-successful private enterprise. Like many if not most businesses which started small and grew into a successful niche, the company’s very success is the wellspring of its limitations: the owners cling to haphazard, anachronistic ways of doing business cobbled together in the distant past rather than risk change (and losing control over anything, even if serving customers demands new systems and some delegation).

As a result, the limitations of the inefficient, failing parts of the company will doom the entire enteprise as soon as a competitor enters their niche. And since the entry of a competitor in a profitable niche is inevitable, then the willful blindness of the company’s founders/managers to the need for adaptation is dooming the company to a desperate make-or-break convulsion at a later point, when competition will force a rapid adaptation which may be too frantic to be successful.

This is an excellent analogy for the U.S. economy and society. We fear adaptation, even as we sense it is necessary and inevitable. We want to cling to the past for as long as we can, even as this dooms us to a convulsive, forced adaptation in the future that is likely to fail for the very reason that it has been put off until the last frantic minute. 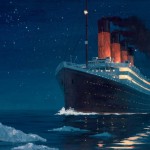 The Titanic offers us a timeless analogy for denial and a frantic, too-late acceptance of grim reality. Had the doomed ship’s leadership actively accepted the challenge to save as many lives as possible, then lifeboats would not have been sent off half-full. The sea was calm; boats could have been safely loaded beyond their designed capacity, and crude life-rafts might have been lashed together. As poor a solution as a lashed-together assemblage of buoyant materials would have been welcomed as a better alternative than certain death.

But instead, the “plan” was to maintain a veneer of normalcy: the band played on, even as the bow sank lower into the unforgiving icy water.

Fed chairman Bernanke, Treasury Secretary Geitner, President Obama and Congress are all ordering the band to play spritely tunes of rising holiday spending, endless borrowing, and the carefully crafted propaganda of Fed manipulation, statistical legerdemain and happy-talk about how the Monster will be gone when we open our eyes.

If we insist–childlike, petulant, resentful of reality–on keeping our eyes closed in 2011, then we are dooming ourselves to facing a much fiercer and more powerful Monster in 2012. We can’t escape the confrontation, and the longer we put it off, hiding under our bed, wishing it all away, the more likely our panicky collapse when reality forces our eyes open.
Source:

In Case You Missed It:  JOIN MASSIVE Nationwide Campaign To Take On Nancy Pelosi and Insider Trading By Congress…With ONE Click!
Posted in Tyranny and tagged Obamanomics, United Socialist States of America.