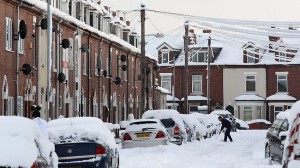 In Africa, drought continues for the sixth consecutive year, adding terribly to the toll of famine victims. During 1972 record rains in parts of the U.S., Pakistan and Japan caused some of the worst flooding in centuries. In Canada’s wheat belt, a particularly chilly and rainy spring has delayed planting and may well bring a disappointingly small harvest. Rainy Britain, on the other hand, has suffered from uncharacteristic dry spells the past few springs. A series of unusually cold winters has gripped the American Far West, while New England and northern Europe have recently experienced the mildest winters within anyone’s recollection.

As they review the bizarre and unpredictable weather pattern of the past several years, a growing number of scientists are beginning to suspect that many seemingly contradictory meteorological fluctuations are actually part of a global climatic upheaval. However widely the weather varies from place to place and time to time, when meteorologists take an average of temperatures around the globe they find that the atmosphere has been growing gradually cooler for the past three decades. The trend shows no indication of reversing. Climatological Cassandras are becoming increasingly apprehensive, for the weather aberrations they are studying may be the harbinger of another ice age.

Telltale signs are everywhere —from the unexpected persistence and thickness of pack ice in the waters around Iceland to the southward migration of a warmth-loving creature like the armadillo from the Midwest.Since the 1940s the mean global temperature has dropped about 2.7° F. Although that figure is at best an estimate, it is supported by other convincing data. When Climatologist George J. Kukla of Columbia University’s Lamont-Doherty Geological Observatory and his wife Helena analyzed satellite weather data for the Northern Hemisphere, they found that the area of the ice and snow cover had suddenly increased by 12% in 1971 and the increase has persisted ever since. Areas of Baffin Island in the Canadian Arctic, for example, were once totally free of any snow in summer; now they are covered year round.

Scientists have found other indications of global cooling. For one thing there has been a noticeable expansion of the great belt of dry, high-altitude polar winds —the so-called circumpolar vortex—that sweep from west to east around the top and bottom of the world. Indeed it is the widening of this cap of cold air that is the immediate cause of Africa’s drought. By blocking moisture-bearing equatorial winds and preventing them from bringing rainfall to the parched sub-Sahara region, as well as other drought-ridden areas stretching all the way from Central America to the Middle East and India, the polar winds have in effect caused the Sahara and other deserts to reach farther to the south. Paradoxically, the same vortex has created quite different weather quirks in the U.S. and other temperate zones. As the winds swirl around the globe, their southerly portions undulate like the bottom of a skirt. Cold air is pulled down across the Western U.S. and warm air is swept up to the Northeast. The collision of air masses of widely differing temperatures and humidity can create violent storms—the Midwest’s recent rash of disastrous tornadoes, for example.

Sunspot Cycle. The changing weather is apparently connected with differences in the amount of energy that the earth’s surface receives from the sun. Changes in the earth’s tilt and distance from the sun could, for instance, significantly increase or decrease the amount of solar radiation falling on either hemisphere—thereby altering the earth’s climate. Some observers have tried to connect the eleven-year sunspot cycle with climate patterns, but have so far been unable to provide a satisfactory explanation of how the cycle might be involved.

Man, too, may be somewhat responsible for the cooling trend. The University of Wisconsin’s Reid A. Bryson and other climatologists suggest that dust and other particles released into the atmosphere as a result of farming and fuel burning may be blocking more and more sunlight from reaching and heating the surface of the earth.

Climatic Balance. Some scientists like Donald Oilman, chief of the National Weather Service’s long-range-prediction group, think that the cooling trend may be only temporary. But all agree that vastly more information is needed about the major influences on the earth’s climate. Indeed, it is to gain such knowledge that 38 ships and 13 aircraft, carrying scientists from almost 70 nations, are now assembling in the Atlantic and elsewhere for a massive 100-day study of the effects of the tropical seas and atmosphere on worldwide weather. The study itself is only part of an international scientific effort known acronymically as GARP (for Global Atmospheric Research Program).

Whatever the cause of the cooling trend, its effects could be extremely serious, if not catastrophic. Scientists figure that only a 1% decrease in the amount of sunlight hitting the earth’s surface could tip the climatic balance, and cool the planet enough to send it sliding down the road to another ice age within only a few hundred years.

The earth’s current climate is something of an anomaly; in the past 700,000 years, there have been at least seven major episodes of glaciers spreading over much of the planet. Temperatures have been as high as they are now only about 5% of the time. But there is a peril more immediate than the prospect of another ice age. Even if temperature and rainfall patterns change only slightly in the near future in one or more of the three major grain-exporting countries—the U.S., Canada and Australia —global food stores would be sharply reduced. University of Toronto Climatologist Kenneth Hare, a former president of the Royal Meteorological Society, believes that the continuing drought and the recent failure of the Russian harvest gave the world a grim premonition of what might happen. Warns Hare: “I don’t believe that the world’s present population is sustainable if there are more than three years like 1972 in a row.”

In Case You Missed It:  World governments are preparing for an Extinction Level Event (ELE); CDC reverses itself on every pillar of COVID theater
Posted in Freedoms and tagged Al Gore, Climate, Global Warming.

Islamic Terror? This is Worse!

A new threat is emerging – or re-emerging – that moves terror beyond even what has been created by blood-thirsty...