David Dreman– Big Ben has done it again, but what he’s done he didn’t mean to do. QE2 is the moniker affixed to the Fed’s second round of quantitative easing, a salvo to jump-start the economy and stave off deflation. Last month the Fed, in a bit of monetary magicianship, began buying the first of what will total at least $600 billion in U.S. Treasury securities by next summer. Ben Bernanke said he wants to keep interest rates low to nurse the nascent recovery into something robust and self-sustaining. 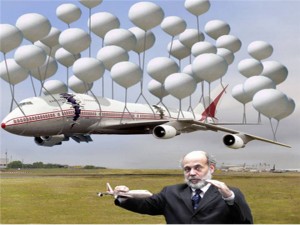 So far the plan has done a complete face plant in its first several weeks of implementation, with bond yields shooting higher, not diving lower. Prices on the 30-year Treasury bond, which move inversely to yield, dropped more than 11%, and yields rose more than 1%, since Bernanke promulgated his plans at a Fed conference in Jackson Hole, Wyo. on Aug. 26.

As an economic elixir, printing money is a sop. With interest rates already extremely low, it is unlikely to sway corporate executives to expand and hire more employees. Worse still, chances are high that this monetary policy gaffe will have serious inflationary repercussions for years to come. It has already drawn the ire of so-called bond vigilantes, who punish profligacy of central banks by selling government bonds.

The Fed’s action has also drawn global opposition. China, Russia, Brazil, Germany and the U.K. all believe that it will seriously weaken the dollar, possibly forcing other countries to devalue their own currencies and impose more trade restrictions against the U.S. Brazil and other emerging economies also fear that by loosening credit, the Fed could cause new destabilizing asset bubbles abroad.

If inflationary fears continue to rise and Treasury prices drop, big foreign holders of U.S. sovereign debt–the Chinese and the Japanese together own $1.7 trillion of it–could hold back on purchases or even pare back holdings. China has already indicated as much. This would be a giant backfire for the Fed.

Any selling or reduced buying of Treasurys either by other countries or by U.S. buyers would put upward pressure on interest rates. It would also lead to increased selling of the dollar. In this scenario the Fed would be forced to buy back large amounts of dollars–in effect printing even more money. Where this spiral would stop nobody knows.

Unfortunately Fed Chairman Bernanke has an almost flawless record of poor forecasts and policy decisions since his tenure began in 2006. On Mar. 28, 2007 he said, “The impact on the broader economy and financial markets” of the subprime mortgage meltdown “seems likely to be contained.” He followed this zinger on June 9, 2008, with a declaration that the danger of a “substantial downturn appears to have diminished.” This, of course, was only three months before Lehman Brothers imploded and the economy collapsed.

Stocks and gold have been acting very positively to QE2, indicating that investors sniff inflation in the air. If there is continued pressure on the dollar, stocks are definitely one of the best places to be. The bond market is the place to have been.

Several stocks still look quite attractive in the glow of QE2.

Inflation can be kind to insurers. Chubb Corp. ( CB – news – people ) (CB, 59) is a giant property and casualty firm serving individuals and businesses worldwide. Net premiums inched up 1% in the first nine months of 2010 and look to go higher with either inflation or a healthier economy. Chubb trades at 9 times trailing earnings and 1.1 times book value, and the stock yields 2.5%.

Energy is another inflation play. Marathon Oil ( MRO – news – people ) (MRO, 35) is the fourth-largest U.S.-based integrated oil and gas company. Net production is more than 400 thousand of barrels of oil equivalent per day, with proved reserves of over 1.7 billion barrels. Shares fetch a modest 12 times earnings and yield 2.9%.

Within days of Obamacare’s passage, The Heritage Foundation began documenting all of the ill Side Effects the new law was...