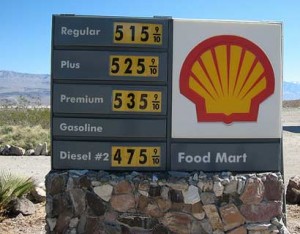 The former president of Shell oil is predicting that the United States will face 1970s-style energy shortages and rationing by the end of the decade, accusing the federal government of turning its back on the country’s domestic oil supply.

The dire prediction comes as energy analysts toss out a string of frightening predictions about the rising price of oil in the short term. Oil has topped $90 a barrel, and JP Morgan Chase & Co. earlier this month predicted oil could hit $120 a barrel by the end of 2012. At the same time, the national average gasoline price is about $3 a gallon for the holiday season

But former Shell executive John Hofmeister offered a more aggressive estimate, saying Americans could be paying $5 a gallon in two years. And he predicted that sometime between 2018 and 2020, supply and demand will become so out of balance that gas stations in several regions of the country will simply start to run out.

“I think it’s going to be a cumulative problem that won’t happen suddenly,” Hofmeister, who now heads Citizens for Affordable Energy, told FoxNews.com. He predicted the problem would start with “stockouts” at select gas stations during the summer and during bad weather and then spread. He said those states farthest from refineries would get hit the worst and that in order to maintain some consistency, local and state governments might resort to the kind of rationing they employed in the early ’70s — when drivers with even-numbered license plates would buy gas on even days, and vice-versa.

With this kind of possibility on the horizon, Hofmeister, who earlier aired his concerns in an interview with Platts Energy Week, criticized the administration for cracking down on domestic oil drilling in the wake of the BP oil spill in the Gulf of Mexico.

“It is pure politics that keeps us from drilling more of our own resources,” he said.

The Interior Department announced earlier this month that it would not pursue any new drilling off the East Coast or in the eastern Gulf of Mexico for at least seven years. Planned lease sales would be pushed off until late 2011 or early 2012.

“As a result of the Deepwater Horizon oil spill we learned a number of lessons, most importantly that we need to proceed with caution and focus on creating a more stringent regulatory regime,” Interior Secretary Ken Salazar said in a written statement at the time, calling the new plan a “careful, responsible path.”

The April 20 explosion on the Deepwater Horizon rig killed 11 people and opened up a leak that gushed oil into the Gulf for months. The decision to tighten Gulf drilling regulations was cheered by environmental groups. The Sierra Club said the BP disaster showed how “dirty, deadly and dangerous offshore drilling is,” applauding the administration for heeding those lessons — the group praised the administration for moving to support alternative-energy investment like wind power.

While clamping down on domestic energy production, the Obama administration has invested billions in renewable energy sources via last year’s stimulus bill and has pushed improved energy efficiency for a range of products in a bid to at least keep demand a bit lower in the long term. New emissions standards for cars and trucks will soon mandate an average fuel economy of just over 35 miles per gallon for new vehicles by 2016.

In addition, the Interior Department is continuing to honor leases for oil drilling in the Arctic.

But government-fueled investment in alternative-energy research takes time, while other options, like nuclear energy, are slow and costly to get off the ground. Hofmeister, noting that domestic oil production has dropped from 10 million barrels a day just a few decades ago to about 5 million a day, said the United States could address its short- and medium-term energy needs by expanding drilling at existing sites and exploring new sites. He said that could help bridge the gap toward ultimately implementing alternative energy sources on a wide scale, as well as improving mass transit.

Oil industry organizations joined together this month in predicting the new regulations on domestic oil production would hurt the economy and increase dependence on foreign oil. The president of the American Petroleum Institute plans to deliver a speech next week in Washington, D.C., on how domestic oil and natural gas production can help stabilize the country.

Oil and gas magnate T. Boone Pickens is likewise pushing for U.S. production of both those energy sources in his high-profile campaign to pry the country off foreign oil. But that’s just one component. His Pickens Plan organization argues that while the U.S. needs every ounce of domestic energy it can muster, there’s not enough oil in all the potential U.S. deposits combined to make up for the 12 million barrels the United States imports every day. FoxNews.com

Documents revealed by Wikileaks show that Egypt continues to see Israel as its primary military threat despite a decades-old peace...