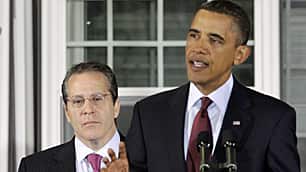 This Tuesday, White House Press Secretary Robert Gibbs tweeted out: “General Motors Co.’s sales were up 21 percent in 2010 for its four core brands.” Which is some interesting spin. As The Truth About Cars points out, GM’s retail market share for all of their brands actually fell a full 1.8 percent in 2010. So why is the President’s closest communication aide doing PR for what is, supposedly, a privately owned car company?

Yes, the Obama Administration did sell off a majority stake of their ownership of GM this November (at a $10 billion loss to taxpayers), but that still leaves them owning about a 37 percent share in the company. In other words, our government is still part owner of a supposedly private car company. And that is not the only continuing link between bailed-out GM and the Obama Administration. The Obama czar who oversaw the GM bailout, Ron Bloom, was just named the new czar for all of manufacturing policy at the White House’s National Economic Council (NEC). So we can expect to see continued favoritism for GM and its bailed-out brothers from the entire Obama Administration.

The manufacturing industry is not the only sector of the economy where the Administration has installed a bailout revolving door. Over just the last two months, the Obama White House has sent budget director Peter Orszag to Citibank ($306 billion bailout), taken in Gene Sperling as NEC director from Goldman Sachs (beneficiary of the $173 billion AIG bailout), and added former Fannie Mae ($135 billion bailout so far) lobbyist and JPMorgan ($12 billion bailout) executive Bill Daley as President Barack Obama’s Chief of Staff. There is a phrase for an economy that is so dependent on close relationships between business people and government officials: crony capitalism. And it is strangling our economic recovery.

There is a better way. Instead of relying on bailouts, subsidies, tax loopholes, and regulations to pick and choose which politically connected firms succeed or fail, government should unleash entrepreneurs to create jobs through true free enterprise policies. Specifically, Congress should:

This past June, marking the first anniversary of the Obama Administration’s destruction of our nation’s bankruptcy code, Indiana Governor Mitch Daniels (R) warned: “The nation is not safe from crony capitalism. In the past year we’ve experienced the nationalization of the student loan industry and the passage of national health-care and financial-services regulation, each of which is rife with new opportunities for government favoritism and preferential handouts to favored corporations like Chrysler.” Our economy will never reach its full potential as long as the best way to succeed in business is to succeed in Washington.