Jared Lee Loughner, identified today as the shooter responsible for the mass shooting this morning in Tucson which took the life of federal court judge John Roll and critically injured Democrat U.S. Representative Gabrielle Giffords, lists The Communist Manifesto and Mein Kampf among his favorite books. 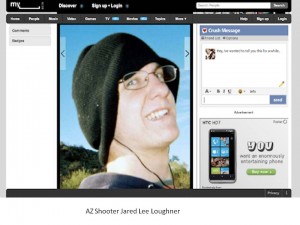 The story of the shooting of the conservative Blue Dog democrat Gabrielle Giffords is a national tragedy that crosses political, religious, and cultural lines. It resonates with all of America that seeks to live in a free nation where individuals can engage in political discourse without fear of violent reprisals. Irregardless of the motivation behind this tragic shooting, Congresswoman Gabrielle Giffords is an American sister, and the shooter, no matter his motivation, is an enemy of freedom and the American Constitution.

The efforts by the left to immediately use this American tragedy to demonize anyone who dares oppose Obamacare and the Obama agenda are just as incendiary and terroristic in nature as the shooter’s act was. These individuals who wish to use an American tragedy, one that is clearly an assault on All our freedoms, to attempt to bury political opponents through political assassinations should be viewed in the same way that people views the acts of this shooter.

More information on the shooter:

Update: The shooter calls himself a terrorist in his YouTube video and indicates he has no religious beliefs. While Giffords has been given optimistic chances of survival, federal court judge and Bush appointee John Roll has died of a gunshot wound.

A person who knew gunman Jared Lee Loughner said that he met with Congresswoman Giffords at least once in the past. Caitie Parker, a high school friend of the shooter, said Loughner told her about meeting the Congresswomen once in 2007.

“He was a political radical. He met Giffords once before in 2007. He asked her a question and he told me she was ‘stupid and unintelligent.’ Parker wrote on her Twitter account. She knew him he was left wing, quite liberal and oddly obsessed with the 2012 prophecy. Loughner disagreed with the Congresswomans conservative approach on things, especially with her being a Democrat.

Members of the 112th Congress were sworn in just days ago, and already lawmakers are making big waves. Rep. Michele...