Jared Lee Loughner, the suspected gunman in Saturday’s Arizona shooting, attended a high school that is part of a network in which teachers are trained and provided resources by a liberal group founded by Weatherman terrorist Bill Ayers and funded by President Obama. They could be linked to the MK-ULTRA: The CIA’s Mind Control Program, Loughner mentioned this on his myspace page and it was pulled immediately after the shooting occurred. 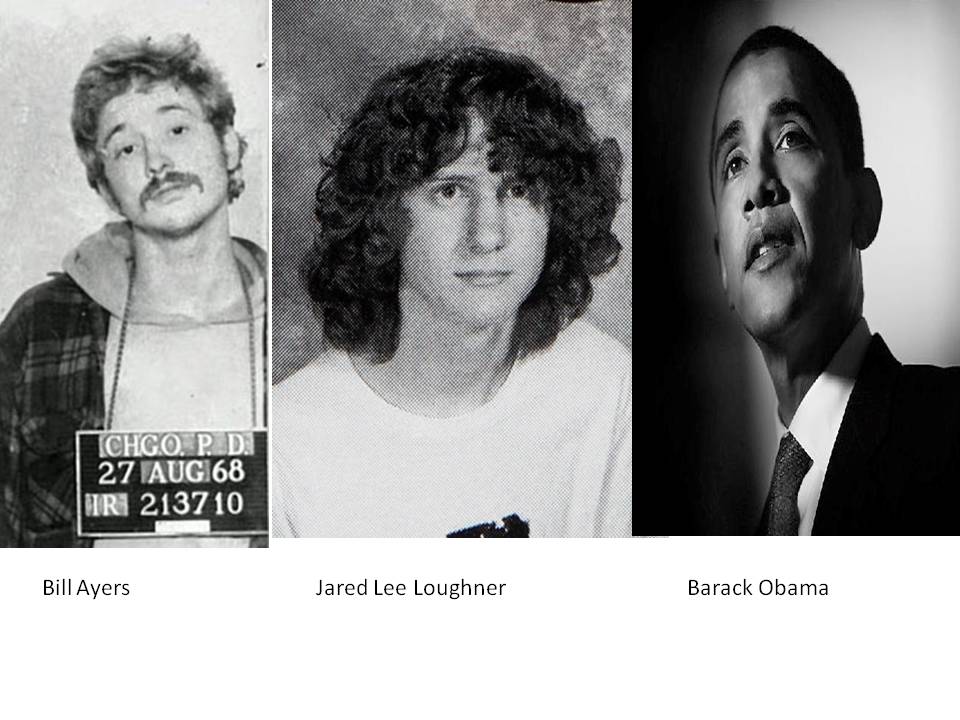 The group, Small Schools Workshop, has been led by a former top communist activist who is an associate of Ayers.

Obama provided the group with funds in the 1990s when he worked at an education reform group alongside Ayers.

Since 2003, Mountain View has been part of what is known as the Smaller Learning Community, a network of schools that have been restructured to create a more personalized learning environment where students often have the same teachers and fellow students from grade to grade.

Mountain View was part of the Smaller Learning Communities throughout Loughner’s entire attendance there, from 9th grade until he withdrew without graduating before his senior year.

The high school received grants to research the concepts of Smaller Learning Communities and work to implement them.

Small Schools Workshop is a recommended agent for how to implement smaller schools curriculum, including at Loughner’s alma mater, Mountain View.

The Small School Workshop originally was associated with the University of Illinois in Chicago, where Klonsky previously taught in the education department alongside Ayers, who retired from the university last year. The group was headquartered for a time inside the university’s department of education building.

In 1995, with Obama as its chairman, the newly formed Chicago Annenberg Challenge, or CAC, a school reform organization, gave the Workshop a grant of $175,000. The CAC provided another $482,662 to the Workshop over the next few years.

Ayers was on a working group of five that originally founded the Chicago Annenberg Challenge. Correspondence shows Ayers was instrumental in recruiting Obama to serve as the CAC’s first chairman.

Ayers served as co-chairman of the Chicago School Reform Collaborative, one of the two operational arms of the CAC.

Klonsky served with Ayers and Ayers’ wife, former Weatherman terrorist Bernardine Dohrn, in the Students for a Democratic Society group, a major leftist student organization in the 1960s that later splintered, with Ayers and Dohrn leading a more activist approach with the Weatherman. Klonsky reportedly favored less aggressive tactics, promoting the philosophy that young workers possessed the potential to be a revolutionary force to overthrow capitalism.

In the 1970s, Klonsky became a top communist activist and leader of the Marxist-Leninist Communist Party.

He reportedly identified as a Maoist, and traveled in 1977 to Beijing, where he held friendly meetings with the Chinese leadership.

In a book, “Revolution in the Air,” author Max Elbaum, himself a former Maoist activist, recounts that in Beijing, Klonsky toasted the Chinese Stalinist leadership who, in turn, hailed the formation of his Communist Party group as “reflecting the aspirations of the proletariat and working people,” effectively recognizing Klonsky’s organization as the all-but-official U.S. Maoist party.

In a brief conversation in September 2008, Klonsky would not state whether he is still a communist. He did not deny his associations with Ayers or his communist activism in the 1970s.

Loughner, meanwhile, posted on his YouTube channel a number of books he listed as his “favorites.”

The books read more like a high school curriculum. They include Animal Farm, Brave New World, The Odyssey, Alice Adventures Into Wonderland, Fahrenheit 451, To Kill A Mockingbird, One Flew Over The Cuckoo’s Nest, and some unsavory titles such as The Communist Manifesto and Hitler’s Mein Kampf.

A call to fellow student Caitie Parker, who went to high school, college and was in a band with the gunman, labeled Loughner as “quite liberal” and “more left” on her Twitter account.

In her Twitter postings, Parker wrote of Loughner, “As I knew him he was left wing, quite liberal and oddly obsessed with the 2012 prophecy.”

She also described him as “more left.

Israel is shocked by international criticism of the demolition of a Jewish-owned property in Jerusalem. "Calling Jerusalem a settlement is...