For years the left has made statements like “kill” Bush, “assassinate” Bush, they even made a film about assassinating Bush in Canada and it was nominated the years best film. Now that is a blatant outright suggestion of murder but it is very difficult to get at a President. 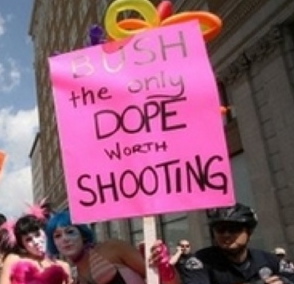 2 excerpts from Michele Malkin:
In her new book, “Peace Mom,” Cindy Sheehan confesses on page 29 that she has imagined going back in time and killing the infant George W. Bush to prevent the Iraq war. Sheehan admits she has entertained this infanticidal fantasy “often.”

Meanwhile, our friends in Canada celebrated the screening of a new kill-Bush fictional documentary at the Toronto International Film Festival. “Death of a President,” a British mockudrama, is set in the fall of 2007 and looks back at the impact on America after President Bush is assassinated as he leaves the Sheraton Hotel in Chicago. The 90-minute feature explores who could have planned the murder, with a Syrian-born man wrongly accused of the crime.

Sarah Palin has never suggested killing anyone but the liberals think that she is like them and that is why they think she was suggesting things like what they blatantly speak out with no hesitancy. 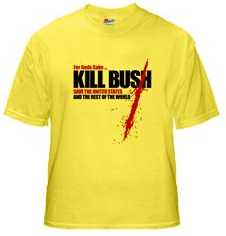 The leftist demanded that no one jump to conclusions when Major Nidal Malik Hasan shot up Fort Hood, even after reports of him screaming “Allah Akbar” during his murdering rampage, liberals ridiculed anyone that linked him to Islam. These same liberals had no problems in their hypocritical approach trying to link the Tea party to the shooting in Arizona just hours after the shooting occurred.

Lets not forget this quote from President Barack Obama in 2008 at a fundraiser in Philadelphia “If They Bring A Knife, We Bring A Gun.” certainly harmless fluff, no better or worse than anything Palin has said.

Another historical revisionism: The Democrat Party was the party of slavery. The Republican party was founded in 1854 for mostly to end slavery but not by starting a civil war which was actually started by the Democrats. Yet the media and government schools always insinuate the Republican party is the racist party.

In Case You Missed It:  DIESELGEDDON – America’s diesel supply on verge of catastrophic collapse, leading to HALTING of food, fertilizer, coal and energy
Posted in Freedoms and tagged Democrats, Freedom, Liberalism.

The Obama administration is not known for its pro-British track record, but this is by far the strongest indication yet...