Frosty Wooldridge– In the past week, I took a shopping tour in Denver, Colorado-my residence for the last four decades. Forty years ago, I walked into American stores like Sears, J.C. Penny’s, K-Mart and McDonald’s along with Ford, Chevy and Chrysler dealerships. I ate at Burger King, Dominos, Dairy Queen and Howard Johnson’s. 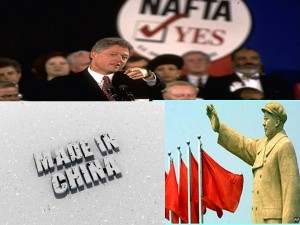 As a teenager, I wore Converse All-Stars for playing basketball. I pulled on my Wrangler or Levi jeans every day for school. The local shoe store kept my feet protected with American cowhide. Hanes and Fruit of the Loom provided my T-shirts.

I shopped at Ace Hardware with creaky wood floors. I bought screw drivers, drills and tools for my needs.

After college, I bought a Maytag washer and dryer. Sears and Penny’s carried everything I needed. I bought dining room, kitchen and bedroom furniture for my apartment.

What did everything I purchased carry in common? Answer: “Made in America”! I depended on quality and excellence. I knew that I strengthened America, kept Americans working and brought vibrancy to my country.

As a service brat, my father instilled in me the importance of God and country. He drove it home to me about responsible citizenship: personal responsibility and personal accountability. During my early morning paper route, I dismounted from my bicycle and stood at attention with my hand over my heart when I heard the bugle for flag raising on the bases where I lived across America-from Camp LeJeune, North Carolina to the Marine Corps Supply Center, Albany, Georgia to the Marine base at Kaneohe, Hawaii on Oahu . Also, San Diego, California; Paris Island, South Carolina; Quantico, Virginia and more!

You might say that my love for my country runs deep, runs wide and runs full. At the same time, as a veteran world traveler across six continents and nearly 100 countries, I witnessed the other side of the coin.

Most Americans do not possess an iota of the poverty, misery, hunger, disease and hopelessness for several billion people on this planet. Too many of the planet’s citizens live like those in Haiti. You never hear about anyone actually starving to death in America, but each year, 18 million humans starve to death worldwide-included in that number-10 million children. (Source: www.WorldHealthOrganization.com )

We spend $12 billion a month rebuilding Iraq and Afghanistan while our country slides down a frighteningly slippery slope! We spend unbelievable billions to send 572,000 of our military personnel to 700 bases around the world in 120 countries-to sit on their butts doing virtually nothing but burning time. For what? Answer: I don’t know! Do you? Can anyone in Congress give us a reasonable answer why we guard other countries’ borders but leave ours completely wide open to millions crossing illegally? Because of our $700 billion annual trade deficit to other countries for making products that flood the USA markets, we suffer a $1.1 trillion debt to China. We stand nostril-deep in $13 trillion national debt.

However, I digress! When I took my shopping trip around Denver, I visited Lowe’s and Home Depot. As I wandered the aisles, I picked up drills, tool boxes, screw drivers and paints. I picked up bird cages, hummingbird feeders, American flags, snow blowers, garden hoses and 50 other items.

What did they enjoy in common: “Made in China”

While I strolled the aisles of Wal-Mart, Target, L.L.Bean, Eddie Bauer, Nordstrom’s, Sports Authority, Macy’s and a dozen other stores, I discovered 90 percent of the tags read, “Made in China”! Yes, a good many other tags showed, “Made in Bangladesh” ; “Made in India” ; “Made in Mexico” ; “Made in Japan” and several other countries.

I found scant few that read, “Made in America”!

Why would our own U.S. Congress and last four presidents set our nation on such a path of eradicating, erasing and eliminating millions of well-paying American manufacturing jobs by shipping them off to other countries-to the detriment of our citizens?

Did someone elect congress-critters to offshore, outsource and insource our jobs into the hands and to the benefit of other citizens of other countries? Weren’t they elected to represent American citizens’ interests?

President Barack Obama, since he won’t release his birth certificate, we don’t know where he was “made”-so we may not be able to count on him. But this new U.S. Congress needs to work for Americans, for our best interests and for the future of our country!

Let’s re-examine H-1B, H-2B, L-1 and other visas when over 1.2 million American IT workers cannot find a job in their field. Let’s examine why the USA only creates 95,000 new jobs monthly but imports 200,000 immigrants and green card holders into this country every 30 days. Why? What benefit? Who in Congress keeps doing that to our citizens? Why not bring manufacturing jobs back into our country and let China make and buy its own products instead of turning the USA into a debt-laden morass?

Why not return “Made in America” as the most honored, most quality and most logical method for bringing peace, prosperity and the American Way of Life back to our citizens? As my dad said, “Take responsibility and personal accountability in everything you do in this life.”

Barack Obama and Congress need to listen to my dad. He makes sense!

In Case You Missed It:  Get Ready for the Economic Collapse
Posted in Financial and tagged China, Clinton, Communism, Depression, Economy, Made in China, Mao.