On November 5, 2009, Maj. Nidal Hasan opened fire at a troop readiness center in Ft. Hood, Texas, killing 13 people. Within hours of the killings, the world knew that Hasan reportedly shouted “Allahu Akbar!” before he began shooting, visited websites associated with Islamist violence, wrote Internet postings justifying Muslim suicide bombings, considered U.S. forces his enemy, opposed American involvement in Iraq and Afghanistan as wars on Islam, and told a neighbor shortly before the shootings that he was going “to do good work for God.” There was ample evidence, in other words, that the Ft. Hood attack was an act of Islamist violence. 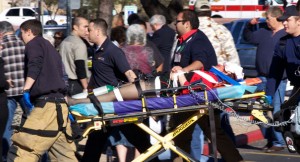 Nevertheless, public officials, journalists, and commentators were quick to caution that the public should not “jump to conclusions” about Hasan’s motive. CNN, in particular, became a forum for repeated warnings that the subject should be discussed with particular care.

“The important thing is for everyone not to jump to conclusions,” said retired Gen. Wesley Clark on CNN the night of the shootings.

“We cannot jump to conclusions,” said CNN’s Jane Velez-Mitchell that same evening. “We have to make sure that we do not jump to any conclusions whatsoever.”

“I’m on Pentagon chat room,” said former CIA operative Robert Baer on CNN, also the night of the shooting. “Right now, there’s messages going back and forth, saying do not jump to the conclusion this had anything to do with Islam.”

The next day, President Obama underscored the rapidly-forming conventional wisdom when he told the country, “I would caution against jumping to conclusions until we have all the facts.” In the days that followed, CNN jouralists and guests repeatedly echoed the president’s remarks.

“We can’t jump to conclusions,” Army Gen. George Casey said on CNN November 8. The next day, political analyst Mark Halperin urged a “transparent” investigation into the shootings “so the American people don’t jump to conclusions.” And when Republican Rep. Pete Hoekstra, then the ranking member of the House Intelligence Committee, suggested that the Ft. Hood attack was terrorism, CNN’s John Roberts was quick to intervene. “Now, President Obama has asked people to be very cautious here and to not jump to conclusions,” Roberts said to Hoekstra. “By saying that you believe this is an act of terror, are you jumping to a conclusion?”

Fast forward a little more than a year, to January 8, 2011. In Tucson, Arizona, a 22 year-old man named Jared Lee Loughner opened fire at a political event, gravely wounding Rep. Gabrielle Giffords, killing a federal judge and five others, and wounding 18. In the hours after the attack, little was known about Loughner beyond some bizarre and largely incomprehensible YouTube postings that, if anything, suggested he was mentally ill. Yet the network that had shown such caution in discussing the Ft. Hood shootings openly discussed the possibility that Loughner was inspired to violence by…Sarah Palin. Although there is no evidence that Loughner was in any way influenced by Palin, CNN was filled with speculation about the former Alaska governor.

After reporting that Pima County Sheriff Clarence Dupnik had condemned what Dupnik called “the vitriol that comes out of certain mouths about tearing down the government,” CNN’s Wolf Blitzer turned to congressional reporter Jessica Yellin for analysis. The sheriff “singled out some of the political rhetoric, as you point out, in creating the environment that allowed this kind of instance to happen,” Yellin told Blitzer. “Even though, as you point out, this suspect is not cooperating with investigators, so we don’t know the motive. President Obama also delivered that message, saying it’s partly the political rhetoric that led to this.* So that’s why we want to bring up one of the themes that’s burning up the social media right now. On Twitter and Facebook, there is a lot of talk, in particular, about Sarah Palin. As you might recall, back in March of last year, when the health care vote was coming to the floor of the House and this was all heating up, Palin tweeted out a message on Twitter saying ‘common sense conservatives, don’t retreat — instead reload.’ And she referred folks to her Facebook page. On that Facebook page was a list of Democratic members she was putting in crosshairs, and Gabrielle Giffords was one of those in the crosshairs.”

Yellin noted that Palin had “posted a statement on Facebook saying that ‘my sincere condolences are offered to the family of Rep. Gabrielle Giffords and other victims of today’s tragic shooting in Arizona. On behalf of Todd and my family, we all pray for the victims and their families and for peace and justice.'” Yellin continued: “And I should point out that Republican leaders in Washington have said that this is not a partisan issue, this is about violence, as have some tea party groups. But clearly this is a moment to talk about our political rhetoric.”

“It certainly is,” Blitzer agreed. “But the question is, is there any evidence that the suspected shooter in this particular case was a Sarah Palin fan, read Sarah Palin’s website, was a member on Facebook, watched her tweets, or anything like that?”

“None at all,” Yellin responded. “And there is no evidence that this was even inspired by rage over health care, broadly. So there is no overt connection between Sarah Palin, health care, and the [shootings].”

Indeed, there is no “overt” or any other sort of connection between Loughner and Palin. If such evidence came to light, it would certainly be news. But without that evidence, and after a brief caveat, the CNN group went back to discussing the theory that Loughner acted out of rage inspired by Palin and other Republicans. Conclusions were jumped to all around.

And it wasn’t just CNN. Other media outlets were also filled with speculation about the attack and pronouncements on the state of American political rhetoric. What a markedly different situation from 15 months earlier when, in the face of actual evidence that Maj. Hasan was inspired by Islamist convictions, many media commentators sought to be voices of caution. Where was that caution after the shootings in Arizona?

Why hasn’t Obama warned against ‘jumping to conclusions,’ as he did after Ft. Hood?

On November 6, 2009, the day after Maj. Nidal Hussein allegedly killed 13 people at Ft. Hood, Texas, President Obama made a brief statement to the nation. “This morning I met with FBI Director Mueller and the relevant agencies to discuss their ongoing investigation into what caused one individual to turn his gun on fellow service men and women,” the president said. “We don’t know all the answers yet, and I would caution against jumping to conclusions until we have all the facts.”

As the president spoke, there was much public speculation about Hasan’s possible motive — there were reports, for example, that he shouted “Allahu Akbar!” before he began shooting; that he visited websites associated with Islamist violence; that he wrote Internet postings justifying Muslim suicide bombings; that he considered U.S. forces his enemy; that he opposed American involvement in Iraq and Afghanistan as wars on Islam; and that he told a neighbor shortly before the shootings that he was going “to do good work for God.” Still, Obama warned the nation against “jumping to conclusions” about a motive for the murders.

Now, Obama is preparing a speech on another killing spree, the shootings in Tucson, Arizona that targeted Rep. Gabrielle Giffords, killing six and wounding 14. Obama has made three public statements about the violence, each expressing regret for the event, sympathy for the victims, and a determination to find the cause. But even as television, radio, the Internet and print publications have been filled with speculation about the killer’s motive, Obama has not cautioned against “jumping to conclusions,” as he did in the Hasan case.

“We do not yet have all the answers,” the president said in a written statement Saturday. “What we do know is that such a senseless and terrible act of violence has no place in a free society.”

“A suspect is currently in custody, but we don’t yet know what provoked this unspeakable act,” the president said in public remarks later on Saturday. “A comprehensive investigation is currently underway, and at my direction, [FBI] Director Bob Mueller is en route to Arizona to help coordinate these efforts.”

On Monday, Obama spoke again, this time during a press appearance with French President Nicolas Sarkozy. “We have a criminal investigation that is ongoing and charges that no doubt will be brought against the perpetrator of this heinous crime,” Obama said. “In the coming days we’re going to have a lot of time to reflect. Right now, the main thing we’re doing is to offer our thoughts and prayers to those who’ve been impacted, making sure that we’re joining together and pulling together as a country.” Perhaps Obama’s “a lot of time to reflect” was an indirect appeal to people to ease up on speculation about the crime, but if it was, it was quite indirect. And it certainly wasn’t the specific warning against “jumping to conclusions” that the president issued after the Ft. Hood shootings.

On Wednesday Obama will make a more definitive statement about the Arizona shootings when he travels to Tucson for a memorial service. Perhaps then he will address the extensive charges, made mostly by his supporters, that the violence was the result of overheated rhetoric from Sarah Palin, the Tea Party, Rush Limbaugh, and Republicans in general. Will Obama take the side of those who blame the violence on the political Right? Or will he place the blame solely on accused shooter Jared Loughner, whose apparent mental illness fits no recognized political template?

When Obama made his main speech about the Ft. Hood killings, at a November 10, 2009 memorial service, he devoted 61 words of a 2,000-word speech to the killer’s motive. “It may be hard to comprehend the twisted logic that led to this tragedy,” Obama said. “But this much we do know — no faith justifies these murderous and craven acts; no just and loving God looks upon them with favor. For what he has done, we know that the killer will be met with justice — in this world, and the next.”

In that speech, Obama took care to place blame squarely on the accused killer, Hasan, and not on any larger idea, ideology, faith, or political viewpoint. What will he say when the time comes to discuss the crimes of Jared Loughner?

In Case You Missed It:  VIDEO: Clueless Joe Biden Is Completely Lost – Laughs Off Latest Poll that Highlights His Incompetence
Posted in Tyranny and tagged Arizona, Fort Hood, Obama.

Dont Give a Fig for Turkey on Tu B’Shvat

You bought from Turkey, you financed the next flotilla,” says a group that will launch a campaign on Thursday against...