Merely a week after a crazed gunman shot Congresswoman Gabrielle Giffords in the head and left several others dead and wounded at a local political event, a Tea Party spokesman in the same area received a public death threat at a town hall meeting– from one of Jared Loughner’s victims. 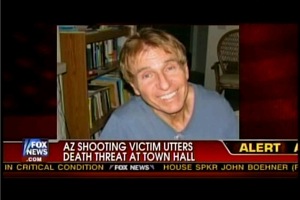 Local station KGUN is reporting that Eric Fuller a 63-year-old military veteran who was shot in the back last Saturday while attending Rep. Giffords’ “Congress on Your Corner” event, became enraged by the statements of some of the participants at the town hall events and threatened the life of Tea Party spokesman Trent Humphries. This is how the scene is believed to have played out:

Toward the end of the town hall meeting Saturday morning, one of the shooting victims, J. Eric Fuller, took exception to comments by two of the speakers: Ariz. state Rep. Terri Proud, a Dist. 26 Republican, and Tucson Tea Party spokesman Trent Humphries.

According to sheriff’s deputies at the scene, Fuller took a photo of Humphries and said, “You’re Dead.”

Fuller is being charged with threats, intimidation, and disorderly conduct according to authorities. He has been profiled by CBS and has publicly blamed Sarah Palin, Glenn Beck, and Sharron Angle for inciting the violence that caused the events of last Saturday. The town hall meeting is scheduled to be aired tomorrow on ABC– whether this incident will make it to broadcast is yet to be seen, though, oddly, ABC News has yet to report on this incident.

More Than Half of All States Now Suing to Stop Obamacare

This Wednesday Maine Attorney General William Schneider announced that the Pine Tree State would become the 23rd state participating in...