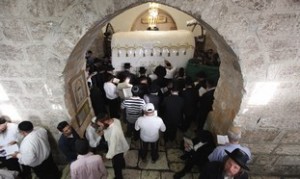 A new report by the Institute for Monitoring Peace and Cultural Tolerance in School Education (IMPACT-SE) stated on Tuesday that the Palestinian Authority gave new names to historical Jewish sites, among them Rachel’s tomb, in schoolbooks.

The report was recently prepared by IMPACT-SE following a UNESCO decision recognising Rachel’s Tomb as a mosque only.   According to the report, in school books from 1995 Rachel’s Tomb was mentioned by its historical name.  Since 2001 the civil studies books’ editors reported to their students that they have decided “with the help of Arab and Islamic centers” to change its name to Bilal Ibn Rabah Mosque.

The decision to rename the mosque has turned the feminine Rachel into a masculine Bilal. According to tradition, Bilal was a slave who was set free and then converted to Islam after meeting Muhammad of the Quraish tribe; he was later buried either in Bader near Amman or in Damascus, the legend says.

According to the CEO of the institute and the author of the report, Shelley Elkayam, the phenomenon is characterised by a few levels of significance, among them gender symbolism alongside subversive logical undermining and a slipping away from the modern-historical to the mythical-legendary.

Elkayam asserted that the Palestinian edition itself explains the process of change as a conscious manipulation which was done by “Palestinian, Arab, and Islamic centres and with the help of charities working to revive the Arab Palestinian heritage to maintain the character of Palestine and its heritage like Al-Burke Wall – the Western Wall, Bilal Ibn Rabah Mosque – Rachel’s tomb.”

The IMPACT-SE report showed the change clearly. On page 91 in the 1995 grade 6 book Palestinian Civil Studies, Rachel’s tomb was “Rachel’s tomb: mother of Joseph our lord (Said) and Jacob’s wife”, while on page 56 in the 2001 version of the book for grade 7 Rachel’s tomb was transformed by the Palestinians into a mosque.

In the schoolbook from 2001, in an exercise titled “attempts to erase the Palestinian heritage” Bilal Mosque [Rachel’s tomb] and the cave of the Patriarchs are presented to the children as part of the Palestinian “philosophical heritage” and examples of “the attempt to ‘turn Jewish’ Muslim-religious places like: Abraham’s Mosque [cave of the patriarchs] and Bilal Ibn Rabah mosque [Rachel’s tomb]”.

According to Elkayam the manipulation confuses children and causes a misunderstanding of historical sequence and is against UNESCO recommendations in the field of education and science.

Muslims in Iraq built a Mosque over the tomb of Ezekiel, one of the most sacred sites for Christians and Jews alike. The Muslims also removed all Hebrew marking from the area and replaced them with Arabic marking claiming the site was holy to Muslims.

The referendum for southern Sudan’s independence, which began on January 9, reached the necessary 60% participation a few days ago....