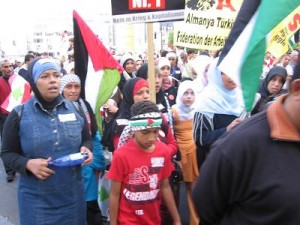 uslims are ruining our country.”

So claims Thilo Sarrazin, a former member of the German Central Bank, in his runaway best-seller “Germany Is Doing Away with Itself,” which already has sold more than a million copies in Germany

Sarrazin’s claim is that Germany’s Muslims are not only bleeding the country’s welfare system but also lowering the intelligence of the German people.

The book has created a storm of controversy and has been repudiated by German Chancellor Angela Merkel.

On talk shows throughout the country, the central topic is the refusal of Muslims to assimilate within German society.

“When I go on talk shows and we discuss the book, callers say ‘I’m not a Neo-Nazi, or a Nazi, but this book has finally allowed me to tell you that the Muslims in this country are here to get welfare and they don’t want to accept our values,’ ” Wolfgang Benz, the former head of the center for anti-Semitic research at the Technical University in Berlin, told FoxNews.com. “

Germany’s Muslim problem has its roots in 1961, during the post-war economic boom, when Turkish workers were recruited for manual labor at mimimum wages. Turks now comprise 3.2 million of the 4.2 million Muslims within the country. Most of the remaining 1 million come from Arab countries.

“Culturally and morally the Muslims represent a step backward for German society,” Sarrazin writes. “If the birth rate of the migrants continues to remain higher than the indigenous population, within a few generations the migrants will take over the state and society and create a nation of dunces.”

The Berlin newspaper Tageszeitung asks: “What should be done if 66 years after the banning of Hitler’s “Mein Kampf” another treatise on racial theory turns into a best-seller in Germany?”

Polls following the book’s publication show considerable anti-Muslim sentiment. The center-left Friedrich Ebert Foundation poll in October showed that more than 30 percent of Germans believe the country “is being overrun by foreigners.” Sixty percent of Germans would “restrict the practice of Islam.”

Wikileaks: American “Hiroshima” in the Works

WikiLeaks has released classified documents that show that al Qaeda possesses “the technical competence to manufacture an explosive device beyond...