“What if the Problem Really is the People?” 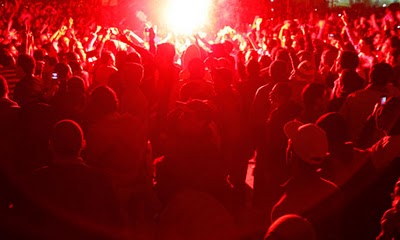 A thousand talking heads and neo-conservative experts on the region assure us that a bright future stretches out before Egypt like a magic carpet. “Democracy,” “Freedom”, “Representative Government” are the buzzwords that trickle wetly out of their printers. All cynicism is disdained and skepticism swept into the dustbin. History is being made here. But the tricky thing about history is that it isn’t a point on a map, but a continuous wave. Like the tide, history is made and remade over and over again, formed and repeated, washed and beached on the shores of time.

Mubarak is the problem, we are told. And he certainly is their problem. The pesky 82 year old air force officer standing in the way of their dreams of a new Egypt. If not for him, Egypt would be a liberal model for the region. Just like Gaza, Lebanon and Iraq. But is it the dictator or the people who are the problem? The protesters are unified by a desire to push out Mubarak. But what do they actually stand for, besides open elections.

59 percent of Egyptians want democracy and 95 percent want Islam to play a large part in politics. (As Egypt has approximately 5 percent of Christians that means 100 percent of Muslims want Islam to play a large part in politics.) 84 percent believe apostates should face the death penalty. That is what Egyptian democracy will look like. A unanimous majority that wants an Islamic state and a bare majority that wants democracy. Which one do you think will win out? A democratic majority of the country supports murdering people in the name of Islam. Mubarak’s government does not execute apostates or adulterers. But a democratic Egypt will. Why? Because it’s the will of the people.

The cheerleaders shaking their pom poms for Egyptian democracy don’t seem to grasp that the outcome could be anything other than positive. It’s an article of faith for them that freedom leads to freedom. That open elections give rise to human rights. That the problem can only be the dictator, not the people. Never the people. That is their ideology and they will stick to it.

Ever since World War II, we have been working off the “Hitler Paradigm”. The “Hitler Paradigm” says that there are no bad nations, only bad governments. The people themselves are perfectly fine, but occasionally a tiny minority of extremists size power. This allows the liberally minded to reconcile the need for occasional wars with their faith in mankind. Instead of fighting wars against nations, they fight wars to liberate nations from their despotic regimes. And ever since we have been fighting these “Wars of Liberation.”

We fought to free Korea and Vietnam from Communism, but we lacked one basic thing. Ground level support from the people we were fighting to protect. Today South Koreans like Kim Jong Il more than they like us. We fought to free the tyrants of Kuwait and Saudi Arabia from Saddam Hussein. As a reward, they financed the terrorists who have been killing us ever since. We fought to free Iraq from Saddam, and the entire country imploded into armed camps. Our “Victory in Iraq” came about because we cut a deal with the Baathists against the Shiites and Al Qaeda, essentially restoring a broken version of Saddam’s old status quo. We fought to liberate Afghanistan, and now we find ourselves allied with some Muslim warlords who abuse women and rape little boys– against the other Muslim warlords who abuse women and rape little boys.

Handing out democracy like candy does not fix existing cultural problems. It does not end bigotry, free women or stop murder in the name of Allah. Open elections are only as good as the people participating in them. And the 84 percent of Egyptians who want to murder apostates have issues that democracy will not solve. The problem with Egypt is not Mubarak– but the Egyptians.

Let’s take another example. In Jordan, the next target on the freedom tour, King Hussein passed a bill to criminalize the honor killings of women. And their democratically elected parliament voted 60 to 25 to strike the bill down. It took them only 3 minutes. That’s what democracy would mean for the Jordanian girls murdered by their husbands, brothers and fathers. The right of the people and their duly elected representatives to legalize the murder of women.

The Hitler Paradigm says that all you have to do is take away the dictator and his staffers to usher in democracy, freedom and mutual amity. But what if the dictator is not the problem, but the symptom of a larger cultural problem?

Take the Cold War. We defeated Communism without a massive war. The Berlin Wall came down. Democracy came to Russia. Except here we are back to square one. The situation in the region has been reset back to before WW2, with a chaotic Eastern Europe and a predatory Russia. Economic liberalization and even the end of Communism did not change the underlying pattern. Despite a brief period of democracy, Russia reverted to a totalitarian regime with designs on the rest of the region. And that should have shocked no one, because it is exactly what happened after the fall of the Czars culminating in the Bolshevik takeover. All the reforms and liberalization did not give the average Russian what he wanted most– stability, order and a strong nation.

Freedom is culturally determined. It is not the same thing as democracy. Nor is democracy as ubiquitous and universal as its advocates would like us to believe. Like all forms of power, it can only be exercised by those who are ready for it. Much of the world is not ready for it, no more than 12th century Europe was ready for the Constitution. Given the power to choose, they will choose tyranny. They will choose the known over the unknown, the stable over the unstable, and order over freedom.

A society with a social hierarchy embedded in its culture will preserve that hierarchy even with democratic elections Such elections will not give women freedom or rights to religious minorities or freedom of expression to unpopular views. These are things which stem from legal guarantees such as the Constitution, they do not arise out of the natural course of open elections. And the pundits who are busy pretending that this is how it works in the columns of every major newspaper are playing the fool.

The United States has freedom due primarily to its culture. Those freedoms were an outgrowth of the rights of Englishmen and the Enlightenment. They cannot be exported to another country– without also exporting the cultural assumptions that produced them.

Egypt’s period of greatest liberalization was under British rule. Since then its cosmopolitan nightspots have been torched and it has drifted closer to Islamization. Even Egypt’s current level of human rights under Mubarak is above that of most of its neighbors. And the reason for that is Mubarak’s ties to America. The more democratic Egypt becomes, the more its civil rights will diminish. Its rulers will see social issues as an easy way to compromise with the Muslim Brotherhood. As Egypt’s cultural ties to the West diminish, so will its freedoms.

The Islamists understand this far better than the neo-conservatives. That is why they campaign so ruthlessly against Western culture. They understand that it is cultural assumptions that dictate behavior, more than any law. While we try to export institutions to the Muslim world, they export Muslim culture to us. And they have had far more luck changing us, than we have had changing them. Institutions are shaped by culture, but cultures are not shaped by institutions. Export every aspect of American government to Egypt, and it will run along Egyptian lines, not American ones. And within a year, Egypt’s government will run the same way it does today. Only the window dressing will be different.

Mubarak is one of the last of the Janissaries, the Western trained army officers who seized power across the Arab world in order to implement some twisted semblance of a modern system of government. When the army’s grip on power fails, then Egypt will fall even further. The loss of power by the Turkish military meant a descent into Islamism and terrorism. It will mean the same thing in Egypt.

The “Hitler Paradigm” is the ideological blindspot of so many liberals and the liberally minded who insist that an entire nation cannot be bad, only a dictator, just as a religion cannot be bad, only a tiny minority of extremists. Their knee jerk response to every crisis is to insist that a change of government will change everything, that opening up the system will inherently and inevitably mean freedom. As is so often the case, a single bad idea can lead to tremendous folly.

A people who do not believe in the right to life, liberty and the pursuit of happiness will not be free no matter how many times they go to the polls. You can place voting booths outside every home and run elections every week, and it will still do no good. Freedom may be the birthright of every man, woman and child on earth– but it cannot be theirs until they claim it. As long as they believe in the right of the majority to oppress the minority, in the value of order over liberty, and the supremacy of the mosque over any and all civil and legal rights– then they will never be free. Never. Their elections will either give rise to chaos or tyranny. That is how it is in the Middle East. That is how it will always be until they claim their birthright by closing the Koran and opening their minds.

11 States Will Demand Birth Certificates In 2012

Connecticut, SB291 require "that candidates for president and vice-president provide their original birth certificates in order to be placed on...