Connecticut, SB291 require “that candidates for president and vice-president provide their original birth certificates in order to be placed on the ballot.” That is needed to make sure the candidate “is a natural born United States citizen, prior to certifying that the candidate is qualified to appear on the ballot.” 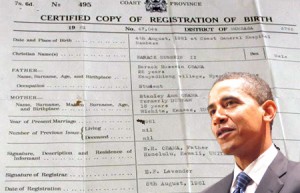 Georgia, HB37 not only demands original birth-certificate documentation, it provides a procedure for and declares that citizens have “standing” to challenge the documentation.

Indiana, SB114 to require candidates to provide a certified copy of their birth certificate and include an affirmation they meet the Constitution’s requirements for the president.

Maine, LD34 require for all candidates for public office to provide proof of citizenship. It states, “A candidate for nomination by primary election shall show proof of United States citizenship in the form of a certified copy of the candidate’s birth certificate and the candidate’s driver’s license or other government-issued identification to the Secretary of State.”

Missouri , HB283, require that certification for candidates “shall include proof of identity and proof of United States citizenship.”

Montana’s plan that candidates would have to document their eligibility and also provide for protection for state taxpayers to prevent them from being billed for “unnecessary expense and litigation” involving the failure of ‘federal election officials’ to do their duty.

Oklahoma, SB91 would require “proof of citizenship for certain candidates” and take the openness one step further, allowing the public access. It demands an “original” birth certificate issued by a state, the federal government, or documentation of a birth of a U.S. citizen abroad.

Pennsylvania working on a proposal that would demand documentation of constitutional eligibility making sure that presidential candidates meet the Constitution’s requirements for age, residency and being a “natural born citizen.”

Texas House Bill 295 A bill filed for the Texas Legislature that would require candidates’ documentation. It would add to the state election code the provision: “The secretary of state may not certify the name of a candidate for president or vice-president unless the candidate has presented the candidate’s original birth certificate indicating that the person is a natural-born United States citizen.”

In Case You Missed It:  Woman Calls For Campaign To ‘Normalize Spitting Into The Drinks Of Trump Supporters’
Posted in Tyranny and tagged Election, Obama, US Citizen.

Why Egypt Will Not Soon Become Democratic