The Washington Times is pulling no punches as they assess the Obama Administration’s handling of the Fort Hood killings:

“A Senate investigation has found that the November 2009 Fort Hood massacre was predictable and avoidable, something that was obvious to anyone except members of the Obama administration. Worse, the White House still refuses to admit that a jihadist terror attack took place on the Army base.

The Senate Homeland Security and Government Affairs Committee recently concluded a year-long look into the circumstances of the domestic terror incident that took 14 lives. The committee report concluded that the Department of Defense and the FBI “collectively had sufficient information to have detected [Major Nidal] Hasan’s radicalization to violent Islamist extremism but failed both to understand and to act on it.”

Despite so many clear warning signs, Hassan was passed through the system. No officials would take the appropriate, necessary action. The reason for their gross negligence was political correctness. The system turned a blind eye because Hasan was a Muslim, and making an accusation against a follower of Islam is a career-ender in the Obama administration. Rather than touch this third rail, officials washed their hands of the problem even though Hasan openly expressed extremist views that bordered on treason.

The White House response to the Fort Hood massacre is a textbook study in denial and coverup. The Obama administration refused to admit it was a terrorist attack, calling it instead an example of “violence in the workplace.” The Army’s official “force protection” report whitewashed the incident and avoided any reference to Hasan’s jihadist motivations. The message to the federal bureaucracy was that even when blood is spilled, even when a soldier slaughters his fellow troops with a cry of “Allah akbar,” official silence will be maintained. Radical Islam is the hatred that dare not speak its name.”

That comes our way via Steve Schippert at Threatswatch in a piece he called “Napolitano’s Elephant In The Room”:

“Months after the Obama administration took office, newly-appointed head of the Department of Homeland Security Janet Napolitano Icompatano stood by a DHS report which concluded that homegrown “right wing extremists” posed the greatest security threat to the United States. Immediately, the explicit politicization of America’s security structures and systems was ratcheted to whole new levels of Donkeys vs Elephants. In the two years since, the American right wing (Conspiratus Pachydermicus) has apparently failed to render the fanciful and politically motivated security assessment true. No right wing bomb plots or shootings or threats have materialized to speak of.

But this is not so regarding the simple domestic nature of the threat, sans the Obama administration’s “right wing” identifier. For, even if not politically identifiable as “right wing” much to the political disappointment of the American Left, several threats and attacks originated with individuals who were American citizens – technically if not culturally.
”
DHS Secretary Napolitano’s elephant in the room is hardly Conspiratus Pachydermicus, but rather Jihadiyun Violentia Mahemicus. Ignoring it won’t reduce the threat. Calling it something else won’t bring back the dead. Certainly neither will save its future prey. 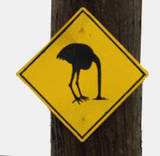 ostrich with its head buried in the shifting sands of political correctness.

Americans have died and will die again as a result.

No Freedom Without a Backbone

A government that sacrifices the long-term security of its own people in a vain attempt to appease its enemies of...