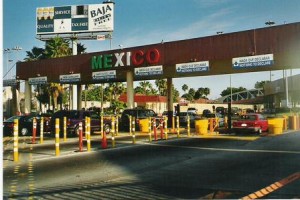 News reports dating back as far as 2007 reported that a handful of Mexicans citizens were employed at America’s airports, they were later arrested in connection with sneaking 14 guns onto a passenger jetliner.

Some Mexicans sure are good at sneaking things into the United States.

Each year drug runners smuggle countless tons of cocaine, marijuana, and other drugs and tens of thousands of people into the United States, and their operations seem to only get bigger.

Apparently Muslim terrorists have heard and there is now a very real and very severe threat from south of the border.

Even before the riots in Egypt, there are big red flags going up that the countries to the south of the United States may play a role in our eventual downfall.

Think of these red flags as foreshadowing to what will be the most horrific event in modern times (if it plays out the way it looks like it’s going to play out).

That is the nuclear attack by terrorists on multiple cities in the United States, and its entire government and way of life collapsing forever. Millions perish.

In 2006 FoxNews.com reported Venezuelan President Hugo Chavez not only predicting the fall of the United States in the near future, but also ending his heated speech to the United Nations with a phrase from Arabic, inshallah, meaning, God willing.

Why is the President of Venezuala, a country in South America, speaking Arabic?

He’s made it clear that he does not like the United States. And these are comments made on the record. What does he say off the record?

If we get hit hard by nuclear terrorists in the coming years, don’t say that you weren’t warned.

This is all conjecture…

Maybe one reason we haven’t been able to find Bin Laden, is that he’s not in the Middle East anymore. Instead, he’s somewhere in hiding in South America, perhaps staying with a business associate, a drug lord with a heavily armed compound deep in a mountainous jungle with its own airstrip.

He asks Bin Laden, “What’s in the package?” Bin Laden says, “Don’t worry, it’s not dope… I just need to know — can you get these packages in ok?”

Drug lord laughs. “I can get anything in.”

If our own people will bomb Oklahoma City (McVeigh and Nichols, 1995), it’s not a hard stretch to see how Bin Laden would be tempted to recruit a handful of Mexicans to sneak in some Muslim extremists (who just happen to also look Mexican) and launch a series of terrorist attacks on the United States.

On top of this, we have the President of Venezuala not only predicting the fall of the United States in the near future, but also speaking Arabic, and repeating a phrase often used by Islamic terrorists, inshallah, God willing.

What do we know?

Some Mexicans can get anything into the United States. (In fact, the same goes for Russians, Chinese, North Koreans, and other nations connected to international organized crime trade.)

Now consider that some Muslims can look a like Mexicans.

And there are a lot of ruthless Mexicans connected with even more ruthless South American gangs and cartels.

The President of Venezuala and his connections will probably play a role in getting Islamic terrorists into the United States; terrorists armed with a few dozen of the hundreds of suitcase nukes that have been for sale for years on the black market. Many Muslims flying from the Middle East do not need Visa’s to enter Venezuela, if they fly in on private jets they go unchecked as well.

There are numerous routes for shipping drugs, and each one of these routes would serve just as well shipping nuclear suitcase bombs. Muslims dressed like Mexicans, driving Mexican style lowriders, playing Mexican music, could probably slip by most people completely unnoticed.

We don’t need to worry about terrorists in the Middle East getting into the United States.

What we need to worry about is terrorists from the Middle East getting into Mexico.

Because once they get into Mexico, then they can get into the United States due to the lax security at the US border.

Tip: We might want to keep an eye out for Mexicans in their twenties and thirties who have full beards (hint, they might not be Mexicans).

Maybe we do need to tighten our borders.

But it’s probably too late.

The World Bank has given a stark warning of the impact of the rising cost of food, saying an estimated...