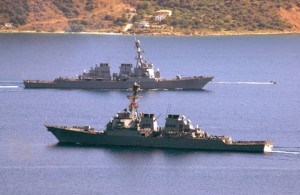 Israel was closely monitoring the Iranian flotilla, whose visit to the Saudi Red Sea port of Jeddah on Feb. 6 was first revealed exclusively by DEBKA-Net-Weekly 481 on February 10.

Up until now, Saudi Arabia, in close conjunction with Egypt and its President Hosni Mubarak, led the Sunni Arab thrust to contain Iranian expansion – especially in the Persian Gulf. However, the opening of a Saudi port to war ships of the Islamic Republic of Iran for the first time in the history of their relations points to a fundamental shift in Middle East trends in consequence of the Egyptian uprising. It was also the first time Cairo has permitted Iranian warships to transit Suez from the Red Sea to the Mediterranean, although Israeli traffic in the opposite direction had been allowed.

Iran made no secret of its plants to expand its naval and military presence beyond the Persian Gulf and Red Sea to the Mediterranean via Suez: On February 2, Iran’s Deputy Navy Commander Rear Admiral Gholam-Reza Khadem Biqam announced the flotilla’s mission was to “enter the waters of the Red Sea and then be dispatched to the Mediterranean Sea.”

However, Israeli military intelligence which failed to foresee the Egyptian upheaval and its policy-makers ignored the Iranian admiral’s announcement and its strategic import, just as they failed to heed the significance of the Iranian flotilla’s docking in Jeddah.

debkafile’s military sources report that Iran is rapidly seizing the fall of the Mubarak regime in Cairo and the Saudi King Abdullah’s falling-out with President Barack Obama (see debkafile of Feb. 10, 2011) as an opportunity not to be missed for establishing a foothold along the Suez Canal and access to the Mediterranean for six gains:

1. To cut off, even partially, the US military and naval Persian Gulf forces from their main route for supplies and reinforcements;

2. To establish an Iranian military-naval grip on the Suez Canal, through which 40 percent of the world’s maritime freights pass every day:

3. To bring an Iranian military presence close enough to menace the Egyptian heartland of Cairo and the Nile Delta and squeeze it into joining the radical Iranian-Syrian-Iraqi-Turkish alliance;

4. To thread a contiguous Iranian military-naval line from the Persian Gulf to the Red Sea through the Suez Canal and the Gaza Strip and up to the ports of Lebanon, where Hizballah has already seized power and toppled the pro-West government.

5. To eventually sever the Sinai Peninsula from Egypt, annex it to the Gaza Strip and establish a large Hamas-ruled Palestinian state athwart the Mediterranean, the Gulf of Aqaba and the Red Sea.
By comparison, a Fatah-led Palestinian state on the West Bank within the American orbit be politically and strategically inferior.

6. To tighten the naval and military siege on Israel.

A Textbook Study of Denial and Coverup

The Washington Times is pulling no punches as they assess the Obama Administration's handling of the Fort Hood killings: "A...