Following closely in the cloven footsteps of Jimmy Carter, President Obama has succeeded in radicalizing the Islamic world in preparation for the return of the Muslim messiah [Hidden Imam], or “Mahdi” who will conquer the world and establish an Islamic Caliphate from sea to shining sea. 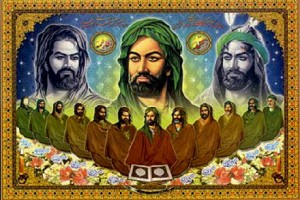 So much for the Obama version of “Democracy”. Don’t be surprised if Barack Hussein Obama and his “Ministerium für Staatssicherheit” Janet Napolitano demand, and seize, the same tyrannical powers to be used against the American citizenry.

This should make the entire Obama administration as happy pigs in slop! It may also end in nuclear conflagration and 25 dollar a gallon gasoline.

That is a best case scenario.

If Israel is attacked and forced to defend it’s people, Al Qaeda will certainly seize the moment to mount attacks against the U.S. Mainland.

According to recently leaked U.S. documents, it has been confirmed that bin Laden’s nuclear programme has been at least as successful as that of the Islamic Republic of Iran.

MUBARAK STEPS DOWN: WHO’S NEXT ON OBAMA’S HIT LIST? 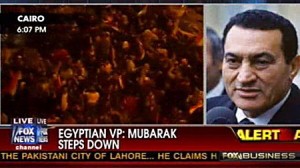 With Mubarak gone and the region in disarray, we can expect Barack Obama and his crew to push forward with plans to shake up the Islamic world. Saudi Arabia, Kuwait, Syria and Jordan will certainly be targeted by the administration. Will Pakistan and it’s 100 nuclear weapons be turned over to the Taliban? Judging from Obama’s recent behavior, we have no reason to doubt that possibility.

“Shi’as believe that Imam al-Mahdi will reappear when the world has fallen into chaos and civil war emerges between the human race for no reason. At this time, it is believed, half of the true believers will ride from Yemen carrying white flags to Makkah, while the other half will ride from Karbala, in Iraq, carrying black flags to Makkah. At this time, Imam al-Mahdi will come wielding Allah’s Sword, the Blade of Evil’s Bane, Zulfiqar (Arabic: ?? ??????, ð? l-fiq?r), the Double-Bladed Sword. He will also come and reveal the texts in his possession, such as al-Jafr and al-Jamia.”

This is not a happy ending but the beginning of something potentially very dark. The end of the Mubarak regime is the biggest shift in the region in 60 years, since Nasser overthrew King Farouk’s dissolute monarchy and diminished London’s influence in Cairo. We are witnessing the unraveling of the American Middle East – that’s to say, of the regimes supported by Washington in the waning of British and French imperial power after the Second World War. The American Middle East was an unlovely place, and perhaps the most obviously repellent illustration of the limitations of “He may be an SOB but he’s our SOB” thinking. It’s “our” SOBs who are in trouble: After the fall of Mubarak, what remains to hold up the Hashemites in Amman? Jordan’s Muslim Brotherhood is more radical than Egypt’s, the regime is less ruthless, King Abdullah’s Arabic is worse than his English, and pretty westernized Queen Rania, who seems so cute when CNN interviewers are fawning all over her, is openly despised outside the palace gates.

Iran is nuclearizing, Turkey is Islamizing, Egypt is …what exactly? Well, we’ll find out. But, given that only the army and/or the Muslim Brotherhood are sufficiently organized to govern the nation, the notion that we’re witnessing the youthful buds of any meaningful democracy is deluded. So who’ll come out on top? The generals or the Brothers? Given that the Brotherhood got played for suckers by the army in the revolution of ’52, I doubt they’ll be so foolish as to make the same mistake again – and the hopeychangey “democracy movement” provides the most useful cover in generations. Meanwhile, James Clapper, the worthless buffoon who serves as the hyperpower’s Director of “Intelligence”, goes before Congress to tell the world that the Muslim Brotherhood is a “secular” organization. Americans ought to take to the streets to demand Clapper vacate whatever presidential palace in DC he’s holed up in.

Amidst all this flowering of democracy, you’ll notice that it’s only the pro-American dictatorships on the ropes: In Libya and Syria, Gaddafy and Assad sleep soundly in their beds. On the other hand, if you were either of the two King Abdullahs, in Jordan or Saudi Arabia, and you looked at the Obama Administration’s very public abandonment of their Cairo strongman, what would you conclude about the value of being an American ally? For the last three weeks, the superpower has sent the consistent message to the world that (as Bernard Lewis feared some years ago) America is harmless as an enemy and treacherous as a friend.

The Democratic National Committee's Organizing for America arm -- the remnant of the 2008 Obama campaign -- is playing an...