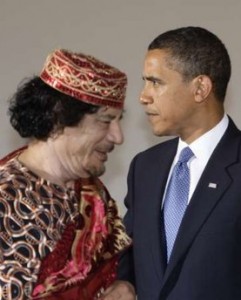 Funding of the ship Amalthea: The Amalthea sailed to Israel with the intent of breaking the Israeli blockade on Hamas. It carried aid for a pseudo humanitarian crisis and supporters who were said to be “keen on expressing solidarity with the Palestinian people in the plight amidst the siege imposed on Gaza.” The ship was funded by Saif Gaddafi’s charity, Gaddafi International Charity and Development Association. Obama’s friend, Bill Ayers, joined attempt #1 against Israel’s blockade on Hamas. Saif joined attempt #2. One has to wonder which of Obama’s friends will step up to the plate at attempt #3.

The release of Lockerbie bomber Abdel Baset al-Megrahi: Saif Gaddafi was involved in negotiating the convicted bomber’s release, and accompanied him back to Libya, where al-Megrahi was praised and welcomed. For those who have forgotten the extent of the carnage of the Lockerbie bombing, 270 people, including 189 Americans, were killed.

Honoring Iraqi journalist, Muntazer al-Zaidi: Al-Zaidi is the journalist who threw his shoe at President George W. Bush. He was given a bravery award by Aicha Gaddafi’s charity, Wa Attassimou. The charity stated that al-Zaidi’s actions “represented a victory for human rights across the world.”

As long as we are connecting the dots between Obama and Libya, now seems a good time to remember that the state department issued an official apology to Libya after spokesman P.J. Crowley made disparaging comments about Gaddafi’s call for jihad against Switzerland. Apparently Crowley spoke on instinct instead of running his reaction by Libya’s “son” first. As an Obamian spinmeister, Crowley learned that one doesn’t speak ill of “family.”

A clear picture of a murky web. Obama’s actions continually link him to people and causes that the majority of Americans do not support. What a web Obama continues to spin. One can only hope he falls into it soon, before all of American is smothered by it.

On February 10, a U.S., military C-17 touched down in Buenos Aires. On board were eight special forces soldiers and...