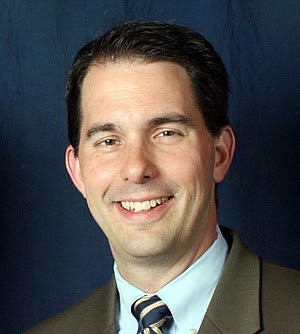 Although the measure has passed the assembly, it must still be passed in the Senate, where Democrats remain in hiding to avoid consideration of the bill. Charles Krauthammer dissects the stalemate in today’s Washington Post:

Wisconsin is the epicenter. It began with economic issues. When Gov. Scott Walker proposed that state workers contribute more to their pension and health-care benefits, he started a revolution. Teachers called in sick. Schools closed. Demonstrators massed at the capitol. Democratic senators fled the state to paralyze the Legislature.

Unfortunately for them, that telegenic faux-Cairo scene drew national attention to the dispute—and to the sweetheart deals the public-sector unions had negotiated for themselves for years. They were contributing a fifth of a penny on a dollar of wages to their pensions and one-fourth what private-sector workers pay for health insurance.

How exactly have these public-sector unions managed to negotiate these sweetheart deals over the decades? On Tuesday, Wisconsin’s Government Accountability Board released a telling report detailing expenditures of the top 10 lobbying groups in the state. According to the report, “the Wisconsin Education Association [WEA] spent $1.5 million in 2009 lobbying state lawmakers, nearly twice as much as the next-largest spender.”

During the 2009–2010 legislative session, the WEA spent $1.5 million and more than 7,000 hours lobbying for more funding for local school districts, against school choice and charter options, against the creation of a tuition tax credit program, and against lifting the cap on virtual schools.

This explains why the fight over collective bargaining—where negotiations are made between the unions and an employer (or this case the state government)—is critical to unions like the WEA. With public-sector unions such as the WEA, the union has a monopoly on the government’s workforce, because the government must agree to the terms negotiated by the union and cannot hire non-union workers. It gives the unions power to override the desires of the voters who elected lawmakers to represent them.

And, by requiring teachers to join a union—which is the case in Wisconsin and in 28 other “forced unionism” states—the power of the union both in terms of size and money is inflated. Requiring teachers to join and automatically deducting union dues through teachers’ payroll also enables the union to amass the enormous funds that fuel their lobbying. Without this considerable power, the WEA—and special interest groups like them nationwide—would not be able to thwart education reforms that are in the best interests of students and teachers.

Wisconsin is a microcosm for a larger problem with education unions. According to Mike Antonucci, who specializes in research on education unions, during the 2007–2008 election cycle, the National Education Association (NEA) and American Federation of Teachers spent more than $71 million on campaigns for issues and candidates, or more than $100 per teacher in five states. These national unions receive their money from the dues of teachers forced to send money to their local affiliate, which then sends the funds to the state affiliate and then on to the national union.

In addition to blocking meaningful education reforms such as school choice, education unions appear to be reckless with the dues money with which teachers entrust them.

Overall, our research suggests that government workers in California are compensated up to 30% more generously than are similar employees in large private firms. And the California experience is similar to that of other large states with powerful public unions. Elected officials are right to reassess public worker compensation as they try to close their budget deficits.

The importance of the movement underway in Wisconsin cannot be overstated. These are long-overdue reforms to collective bargaining and union benefits, reforms that will help ensure the needs of students—not special interest groups—are met.

In Case You Missed It:  McAuliffe’s Closing Message to Voters on Eve of Election: Virginia Has Too Many White Teachers (VIDEO)
Posted in Financial, Freedoms and tagged Financial, Foundry, Freedom, Governments, Obama, United Socialist States of America.

Recent upheavals in the Middle East—including the overthrow of the governments in Tunisia and Egypt, riots in Bahrain, and near...