The oil price spike, driven by instability in the Middle East, has the potential to cause repercussions in the U.S. housing market, according to Barclays‘ Luca Ricci.

The simple reason why a rise in crude prices could tank the housing market is that it has done it before. 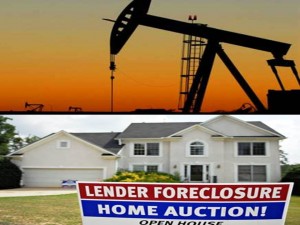 From Barclays’ Luca Ricci (emphasis ours):

The main effect is on consumption via gasoline and energy prices. As consumption generally accounts for 60% of GDP, the effect is large. In oil exporters this effect will be offset by windfall revenues from the higher oil prices, so the overall effect is unclear. In our view, the oil price increase in 2008 significantly contributed to the recession and the financial crisis in the US, which then spread globally. By raising CPI inflation, it reduced real disposable incomes and, hence, the purchasing power of the average households, leading to a contraction in real consumer spending and lowering the ability to repay mortgages.

But the big question is, at what price does this spike start to have the same, or a similar effect?

This suggests that if WTI oil prices stay at about $100/bbl, the effect on growth of the price increase from Q4 10 is likely be about 0.2% by the end of 2011 (Figure 3). If oil prices reach $125/bbl (or $150/bbl) by Q2 11 and stay there, the effect would be double (or triple). The effect may be higher, as the calculations neglect the effect on consumption and investment from heightened uncertainty, as well as possible repercussions in the mortgage and housing markets. The inflationary consequences under the same scenarios would range from 1% to over 3%…

There is little certainty about the exact price point oil needs to hit for the housing market to see an impact, but previous history suggests it is certain to start to feel the pinch more and more as gas prices rise.

In Case You Missed It:  Get Ready for the Economic Collapse
Posted in Financial and tagged Depression, Economy, Energy, Financial, Foreclosures, Mortgages, Oil, OPEC.

Dollar’s Global Fall Will Be ‘Disastrous’ for US Living Standard

Billionaire real-estate magnate Sam Zell warns that Americans should brace for a "disastrous" 25 percent decline in the standard of...