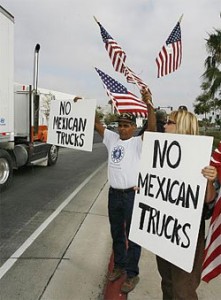 “This deal puts Americans at risk,” Hoffa said. “This agreement caves in to business interests at the expense of the traveling public and American workers.”

The Obama administration closed the border to unsafe Mexican trucks in February 2009 after Congress shut off funds for the cross-border pilot program. Mexico retaliated with tariffs that are excessive. The Teamsters believe the administration should have brought a challenge against Mexico for imposing excessive tariffs on U.S. goods, as the Teamsters Union has urged for nearly two years instead of agreeing to open the border to unsafe trucks.

Hoffa questioned the rationale behind this decision at a time of persistent high U.S. unemployment, budget deficits and unrelenting drug violence in Mexico. He said the proposed program would threaten the traveling public in the U.S. and open our southern border to increased drug trafficking.

“I am strongly opposed to this agreement,” Hoffa said. “Why agree to a deal that threatens the jobs of U.S. truck drivers and warehouse workers when unemployment is so high? And why would we do it when drug cartel violence along the border is just getting worse?”

Ciudad Juarez, which is right across the border from El Paso, is now the most dangerous city in the world. The administration’s own Homeland Security Department issued a warning in December 2010 that noted Texas safety officials urged people to stay away from Mexico.

“The warning comes as kidnappings, violence between drug cartels, as well as between law enforcement and the cartels, increases,” Homeland Security said.

Further, a Homeland Security incident report from Oct. 15, 2010 indicates that drug traffickers have been known to hijack and clone legitimate trucks to transport illicit cargo across the border. According to the document, criminals hijacked over 10,000 commercial trucks in 2010 in Mexico.

Hoffa noted that the trade agreement benefits Mexico but not the United States. “Given the drug violence, there’s no way a U.S. company would want to haul valuable goods into the Mexican interior,” Hoffa said. “Trade agreements are supposed to benefit both parties, but this is a one-way street.

“We continue to have serious reservations about DOT’s ability to guarantee the safety of Mexican trucks. Mexican trucks simply don’t meet the same standards as U.S. trucks. Medical and physical standards for Mexican trucking firms are lower than for U.S. companies. And how can Mexico enforce highway safety laws when it can’t even control drug cartels?

“The Bush-era pilot program was a failure that shouldn’t be repeated,” Hoffa said.

The U.S. government spent $500 million on the pilot program, which began in September 2007. Only about three Mexican trucks per day traveled beyond the border zone until the program was shut down, according to the Transportation Department’s office of inspector general. The inspector general also reported that “FMCSA does not have assurance that it has checked every Mexican truck and driver … when they cross into the border in the United States.”

“Why should American taxpayers pay for Mexican trucking companies to take away American jobs?”

Founded in 1903, the International Brotherhood of Teamsters represents more than 1.4 million hard-working men and women in the United States, Canada and Puerto Rico. Go to www.teamster.org for more information.

Reid’s Obstructionism May Cause Government Shutdown

Senate Majority Leader Harry Reid (D-NV) may cause a government shutdown. Senator Reid is employing a procedural strategy to deal...