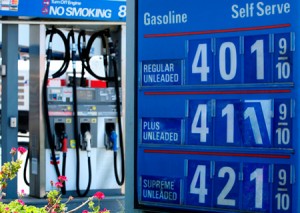 (Reuters) – U.S. drivers will pay another 10 cents a gallon for gasoline before the latest jump in wholesale costs is fully passed on at the pump, and yearly motor fuel costs will rise 28 percent from last year, the Energy Department said on Wednesday.

The average U.S. household will spend about $700 more for gasoline in 2011 than it spent last year, bringing total motor fuel expenses up 28 percent to $3,235, based on an annual pump price of $3.61 a gallon, the department’s Energy Information Administration said.

Retail gasoline prices soared by 38 cents over the last three weeks to $3.52 per gallon, according to the EIA, because of high crude oil costs due to unrest in the Middle East.

“Because the pass-through of changes in wholesale gasoline prices to the retail level is lagged, pump prices would be expected to rise a further 10 cents per gallon to fully reflect the current wholesale price level even without considering any future wholesale price movements,” the EIA said in its weekly review of the oil market.

Higher gasoline prices will give consumers less money to spend on other goods and services, which many economists fear could slow the U.S. economy.

The EIA said it expects drivers will pay an average $3.71 a gallon during the summer peak driving season from June through August, about 98 cents more than last year.

There is a 25 percent chance the pump price will exceed $4 a gallon from June through August, the agency said, compared with a 10 percent probability gasoline could fall below $3 during the same period.

In Case You Missed It:  AG Merrick Garland: Domestic Terrorists Fighting For the “Superiority of the White Race” Are the Greatest Threat to the US (VIDEO)
Posted in Financial and tagged Economy, Energy, Financial, Oil, OPEC, Recession, United Socialist States of America.

Ten Don’ts for Our Government on Gas Prices

As gas prices in the United States continue to soar, policymakers in Washington are eager to point fingers and offer...