If a radiation cloud from Japan’s damaged nuclear reactors eventually reaches the western United States, it could pose a threat to American crops and the people who eat them, nationally known neurosurgeon Dr. Russell Blaylock tells Newsmax.

He also says the radiation could pose a cancer risk, and explains steps to take to protect against the damaging effects of radiation exposure. 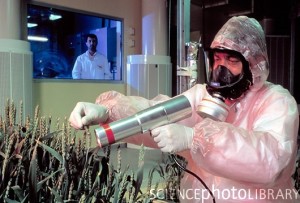 Blaylock is a health practitioner; author of “Nuclear Sunrise,” which examines the threat posed by nuclear radiation; a lecturer; and editor of Newsmax.com’s “Blaylock Wellness Report.” In an exclusive interview with Newsmax.TV, Blaylock was asked about the risks faced by people in Japan close to the damaged reactors.

“Of course people near the site face the greatest danger,” he says.

“Anything over 150 rads [a measurement of radiation] is going to produce radiation sickness. And they’re getting close to that level, from what I understand.

“The safety level is set at 5 rads per year. They’re getting this dose within a short period of time.

“At about 100 to 400 rads you drastically increase death risk. Once you get above 600 rads, about 95 percent of people are going to die within two weeks. This is what they’re worried about.”

Radioactive elements Strontium 90 and Cesium 137, which can be released by a damaged reactor, “have a half-life of 30 years, so we’re talking about very long contamination, a hundred years or more,” he says.

Prevailing winds in the area of the stricken reactors have been heading east into the Pacific, toward the Western Hemisphere. Blaylock was asked about the threat to Americans if radiation from the reactors eventually does reach Hawaii or the West Coast of America.

“Most of the health risks are not going to be due to acute radiation poisoning,” he tells Newsmax. “It’s going to be a risk of increased cancer.

“That’s the big danger, the crops in this country being contaminated, the milk in particular, with Strontium 90. That radiation is incorporated into the bones and stays for a lifetime.”

If radiation does arrive in the United States, people would need “to change their diet. They need to stop eating Western farm products,” Blaylock says.

They might also need to take several supplements that can protect against the effects of radiation, he suggests.

“Taking these supplements not only protects you against radiation but a lot of other diseases including cancer, brain degeneration.”

Among the supplements he cited, iodine can protect the thyroid gland if taken before the exposure to radiation.

Gingko biloba can be protective even after exposure to radiation. Beta-glucan protects the bone marrow. Curcumin also can offer protection after exposure, particularly against breast cancer. He also suggests garlic extract, ginger, melatonin, and magnesium.

Blaylock’s e-book “Nuclear Sunrise” focuses mainly on the threat of radiation from nuclear terrorism, but it examines in detail the effects of radiation and steps to take to protect against radiation damage. It can be found at the website www.blaylockwellnesscenter.com

In Case You Missed It:  Covid “positive” citizens in Hong Kong forced to wear ankle bracelet trackers like criminals
Posted in Freedoms and tagged California, Canada, Japan, US Citizen, Weapons of Mass Destruction.

Europe Must Stand Up to Islamism