By Hege Storhaug– In the past few months, German Chancellor Angela Merkel, French President Nicolas Sarkozy, and British Prime Minister David Cameron have all firmly rejected the disaster that is multiculturalism. Europe is finally waking up to the threat posed by decades of policies which preached tolerance, yet bred the exact opposite: an intolerance by many immigrants, particularly Islamists, for the values of their new homelands. 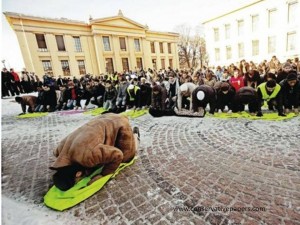 Muslim demonstrators gather at University Square in Oslo to protest against drawings of Muhammad, Calling for Norway's 9/11

A quick look at my own country, Norway, reveals how far radical Islamism has advanced. One year ago, about 3,000 men, many of them in long coats, ankle-high baggy pants and full beards gathered in Oslo’s University Square to condemn Western civilization and explicitly threaten a new 9/11 on Norwegian soil. Not insignificantly, they demonstrated on the very spot where the Nazi thug Vidkun Quisling and his odious followers held anti-Jewish rallies in the 1930s.

Meanwhile, Oslo University College has witnessed the birth of IslamNet, which over the past year has ballooned into Norway’s largest Muslim student organization and which, far from disguising its goal of a sharia-run Norway, broadcasts it loudly and proudly. Islamism also reared its head last year in the Paris of the North, the city of Troms, where a Muslim congregation planned to build a gigantic Saudi-funded mosque. It later emerged that a key figure in this construction project had gone to the Philippines for terrorist training.

Last summer, while the Troms mosque and IslamNet were jointly arranging a “revival tour” of Norway, it was revealed that the government of Iran was sending imams to prepare Muslims to commit terrorist acts here. These imams preach hate propaganda against the West and Jews, among many other targets. They claim that the U.S. is building up al-Qaeda and that Muslims had nothing whatsoever to do with 9/11. They want to ban alcohol and force women to wear hijabs.

One of the mosques staffed by Iranian imams has already challenged freedom of speech in Norway, by attacking Norwegian publications which reprinted Danish cartoons depicting the prophet Muhammad. The same mosque denies the historicity of the Holocaust.

Perversely, these mosques, like every other religious institution in the country, receive financial support from the Norwegian state. The government is eager to give them money, but it appears unconcerned that they urge their followers to commit acts of terror against the very taxpayers who funded their lessons in hatred.

While actual terrorists are relatively few in number, Islamists are not. Their influence is growing across Europe, especially among young people. Among 15-year-old German Muslims, 40% consider Islam more important than democracy, while 37% want Europe’s Muslims to live under sharia law. In Britain, 28% of all Muslims want that country to be governed according to sharia; this sentiment is strongest among the young, with 37% of those between ages 16 and 24 supporting the idea. Among Muslim university students in Britain, fully 40% support sharia either strongly or relatively strongly. One in three of those students considers it legitimate to kill in the name of Islam.

If Europeans continue to ignore these facts, in the hopes the problem will just go away, Europe risks being plunged into a new Dark Ages, comparable to the Nazi era. While politicians’ pronouncements are a good start, they are far from enough. Across Europe, Islamism and sharia law have spread their tentacles into major social institutions. To root out their destructive influence, Europe needs to take decisive measures today, and into the next decade.

We need tougher rules on immigration and asylum. We need to be clear that there is one set of laws and norms that apply to all. Our governments must no longer support organizations that preach and foster hate. As the Norwegian poet Inger Hagerup wrote in a poem penned two years after the Second World War: It is urgent, it is urgent. It can all go wrong again. What are we waiting for?

– Hege Storhaug is the information director of Human Rights Service, Oslo, Norway. Her book But the Greatest of These Is Freedom: The Consequences of Immigration in Europe, a bestseller in Norway, has just been published in English.

50 Kamikazes Try and Stop a Nuclear Disaster in Japan

The news out of Japan about the earthquake and tsunami that are likely to have killed more than 10,000 people....