Dennis Kucinich easily one of the top 10 Islamapologists in the Obama Administration outlining the stamp of approval for Islam, even radical Islam, at the highest levels of the Executive Branch. Islamapologetics has become the latest fad within the Left’s agenda of cultural Marxism. Now, “Free Gaza” mouthpiece, Dennis Kucinich hops on board the Left’s revivalist bandwagon for Islam, proclaiming “Islam is a religion based upon peace, goodwill and the ethical treatment of all people on this planet.” 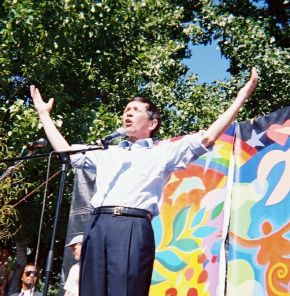 We have long been aware that the Left is adamantly hawkish about “separation of Church and State,” living in continual fear that Christianity and/or Judaism may rear themselves in the public sphere. If anyone dares to recite a Christian prayer in a public school, the Left is there to protest. If the Ten Commandments are displayed inside a courtroom, the Left is there to raise objection. Mocking Christianity is good Leftist fun. Leftists love Jew-hatred, too. Separation of Mosque and State is another story, though.

Islamapologetics is the Left’s new favorite pastime, particularly in response to Congressman Peter King’s hearing to determine if there is radicalization in the Muslim-American community. Dennis Kucinich’s remarks are just the latest in a long litany of examples of Leftist pontification that Islam is pure as the driven snow.

This hearing insinuates that violence and the Muslim religion go hand in hand. Nothing could be further from the truth. Islam is a religion based upon peace, goodwill and the ethical treatment of all people on this planet.

In the sociological context, in which Kucinich is speaking in his endorsement of the religion of Islam, stereotyping is defined thusly:

[A] simplified and standardized conception or image invested with special meaning and held in common by members of a group.

Kucinich falsely claims that the hearing “stereotypes” Islam, but his accusation stereotypes Islam as a religion that is inherently good. As a person of faith who isn’t Muslim, I would argue that nothing could be further from the truth, and I have to wonder what non-Muslim people of faith in Kucinich’s district think about this assertion.

Kucinich is a supporter of the Council on American Islamic Relations (CAIR) and has even participated in fundraising for the San Francisco chapter of CAIR. In a video address for one recent CAIR fundraiser, Kucinich sounds rather like the Billy Graham of Islam as he gives tenderly affirmations of the beauty of Islam and calls his friends at CAIR “brothers and sisters.”

I wish I could be with you personally to share with you my love of Islam and my desire to see Muslims accorded positions of respect and honor, and not just in American society, but everywhere, because of the tradition of Islam, because of the teaching of Islam.

In 2003, Kucinich headlined a San Francisco CAIR fundraiser while it was chaired by Omar Ahmad, who has endorsed suicide bombing. Even leftist Congressman Gregory Meeks expressed deep concerns because of CAIR’s support for terror.

At least one elected official, Meeks, had second thoughts about participating in the CAIR event. When questioned about his attendance at a CAIR dinner earlier this month, he told the New York Sun: “I don’t want to be associated with anyone who condones suicide bombers, anti-Semitism, or any group that condones the extremism in Islam.” He added, “I’m going to do some checking into this right now. I am going to talk to some of my colleagues, particularly some of my Jewish colleagues.”

He said that based on his conversation with the Sun, “I will probably not attend.”

Considering that Dennis Kucinich is helping to raise money for a Muslim Brotherhood front group, and a specific individual who publicly supports suicide bombing, you’ll forgive me for not taking Kucinich’s claims about the hearing…or about the religion of Islam…seriously.

Philippine Institute of Volcanology and Seismology (Phivolcs) Director Renato Solidum says, according to ABSCBN News: A text message has been...