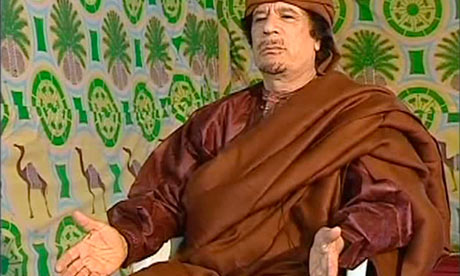 After proclaiming a cease-fire, Colonel Muammar Qadhafi’s regime cynically ordered its troops to attack Benghazi, the leading rebel stronghold, in defiance of the U.N. Security Council resolution prohibiting attacks on civilians. The regime hopes to consolidate control in Libya’s second-largest city before the U.N.-backed military forces can begin counter-attacks.

Once entrenched in the city, Qadhafi’s thugs can wreak vengeance on opposition supporters with minimal risk of attack from U.N.-backed forces pledged to halt civilian deaths. Qadhafi seeks to exploit the fact that he is much more willing to shed Libyan blood than is the U.N. coalition. He knows that it will be much more difficult for the coalition to compel him to withdraw his forces than it would be to prevent him from advancing, once the air umbrella is completely established.

French President Nicolas Sarkozy today convened a summit of Western and Arab leaders in Paris and emerged to announce, “Our planes are already preventing air attacks on the city,” and noted that military action was supported by France, Britain, the United States and Canada, as well as unspecified Arab nations. French reconnaissance planes reportedly already have been deployed over Libya, and attacks on ground targets may be imminent. American, British, Canadian and Danish warplanes also reportedly are deploying to NATO bases in southern Europe.

President Obama announced American support for the U.N. operation in a speech on Friday:

Now, once more, Moammar Qaddafi has a choice. The resolution that passed lays out very clear conditions that must be met. The United States, the United Kingdom, France, and Arab states agree that a cease-fire must be implemented immediately. That means all attacks against civilians must stop. Qaddafi must stop his troops from advancing on Benghazi, pull them back from Ajdabiya, Misrata, and Zawiya, and establish water, electricity and gas supplies to all areas. Humanitarian assistance must be allowed to reach the people of Libya. Let me be clear, these terms are not negotiable. These terms are not subject to negotiation. If Qaddafi does not comply with the resolution, the international community will impose consequences, and the resolution will be enforced through military action.

The United States joined a statement warning the Qadhafi regime that a cease-fire must begin “immediately” in Libya and its troops must withdraw from rebel areas, particularly the cities of Benghazi, Misrata, Ajdabiya and Zawiya. The statement also called for the restoration of water, electricity and gas services in all areas. It said Libyans must be able to receive humanitarian aid or the “international community will make him suffer the consequences” with military action.

Secretary of State Hillary Clinton today said that the United States would use its “unique capabilities” to assist the operation. This hints at a substantial American contribution in intelligence-gathering, surveillance, reconnaissance and offshore naval capabilities, as well as U.S. warplanes being deployed to various bases.

With hostilities imminent between the U.N.-backed coalition and the Libyan regime, it is clear that the Libyan crisis has entered a new phase. The populist uprising, on the verge of being crushed, now has received international protection. After it has repulsed Qadhafi’s lunge to seize Benghazi, the coalition will begin what is likely to be a protracted campaign to pry the regime’s goons away from opposition forces. Libya is likely to dissolve into two warring rump states, with Qadhafi loyalists in the west perpetually clashing with opposition forces, primarily based in eastern Libya. The liberated zone in the east will require substantial international assistance to survive the counter-revolutionary backlash. And military action may be needed immediately to block regime offensives against opposition enclaves in western Libya.

Once the smoke clears from the military operations that appear imminent, the U.N. coalition is likely to find itself in the position of trying to negotiate with a megalomaniac mass murderer in order to protect victimized Libyans and a wide variety of other targets of Qadhafi’s vengeance.

Should it be any surprise that in a state like Wisconsin that has been under the thrall of liberals for...