Everybody in the world has taken note of Obama’s weakness and lack of leadership. It’s so bad that its big headlines in the U.K.

INEFFECTUAL, invisible, unable to honour pledges and now blamed for letting Gaddafi off the hook. Why Obama’s gone from ‘Yes we can’ to ‘Er, maybe we shouldn’t’… 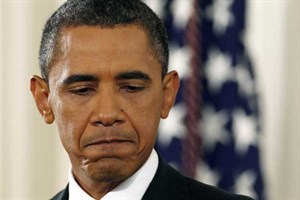 Obama’s campaign slogan was mesmerisingly simple and brimming with self-belief: “Yes we can.” His presidency, however, is turning out to be more about “no we won’t.” Even more worryingly, it seems to be very much about: “Maybe we can… do what, exactly?“ The world feels like a dangerous place when leaders are seen to lack certitude but the only thing President Obama seems decisive about is his indecision….

What is President Obama doing about anything? The most alarming answer – your guess is as good as mine – is also, frankly, the most accurate one. What the President is not doing is being clear, resolute and pro-active, which is surely a big part of his job description. This is what he has to say about the popular uprising in Libya: “Gaddafi must go.” At least, that was his position on March 3….

Since then, other countries – most notably Britain and France – have been calling for some kind of intervention. Even the Arab League, a notoriously conservative organisation, has declared support for sanctions. But from the White House has come only the blah-blah of bland statements filled with meaningless expressions….

What is the Obama administration’s position on the protests in the Gulf island state of Bahrain, which the authorities there are savagely suppressing with the help of troops shipped in from Saudi Arabia? What is the White House view on the alarming prospect of the unrest spreading to Saudi Arabia itself? Who knows? Certainly not the American people, nor the leaders of nations which would consider themselves allies of America….

Every day for almost the last two months our television screens, radio broadcasts and the pages of our newspapers have been filled with the pictures, sounds and words of the most tumultuous events any of us can remember in the Arab world. The outcome of these events, once the dust has settled, could literally change the world. Yet Obama seems content to sit this one out. He has barely engaged in the debate. Such ostrich-like behaviour is not untypical of the 49-year-old President who burst through America’s colour barrier to become the first African-American to occupy the White House….

All of which means that it is starting to look as if Obama and the Democrat Party have but one aim in mind for the rest of this presidential term: to get elected for a second. That means not doing anything that might upset any number of special interest or niche groups, which in effect means not doing very much at all. So, not too many harsh but necessary measures to tackle the financial deficit; no clear direction on where America goes with Afghanistan, even though the war there is going nowhere except from bad to worse….

Yes we can was a noble and powerful mantra which secured for Barack Obama the leadership of the free world. Those than can, do. It is time he started doing.

Zero Leadership From a Zero President

The Middle East is afire with rebellion, Japan is imploding from an earthquake, and the battle of the budget is...