The Middle East is afire with rebellion, Japan is imploding from an earthquake, and the battle of the budget is on in the United States, but none of this seems to be deterring President Obama from a heavy schedule of childish distractions. 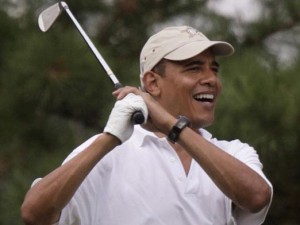 The newly installed tandem of White House Chief of Staff William Daley and Senior Adviser David Plouffe were supposed to impart a new sense of discipline and purpose to the White House. Instead, they are permitting him to showcase himself as a poorly focused leader who has his priorities backward.

This weeks, as Japan’s nuclear crisis entered a potentially catastrophic phase, we are told that Obama was videotaping his NCAA tournament picks and that we’ll be able to tune into ESPN Wednesday to find out who he likes.

Last Saturday, he made his 61st outing to the golf course as president, and got back to the White House with just enough time for a quick shower before heading out to party with Washington’s elite journalists at the annual Gridiron Dinner.

Obama Friday took time out to honor the 2009-10 Stanley Cup Champion Chicago Blackhawks. Thursday was a White House conference on bullying – not a bad idea perhaps, but not quite Leader of the Free World stuff either.

Obama appeared a little sleepy as he weighed in against the bullies, perhaps because he’d spent the night before partying with lawmakers as they took in a Chicago Bulls vs. Charlotte Bobcats game.

Meanwhile, the president has been studying for weeks whether to establish a No Fly Zone over Libya, delaying action while the point becomes increasingly moot as Qaddafi is already half way to defeat and slaughter of his opponents. And lawmakers from both Parties are wondering why he seems to be AWOL in the deficit reduction debate.

The Libya indecision follows an inconsistent response to the protests that ousted former Egyptian President Mubarak and seemed to catch the White House off guard. The perfunctory response from the White House Monday to Saudi Arabia’s dispatch of troops to Bahrain suggested the administration wasn’t prepared for that one either.

But the fun stuff won’t end anytime soon. On Thursday, the Taoiseach of Ireland will be in town to help the president celebrate St. Patrick’s Day. And then Friday it’s off to Brazil for the start of a three-country Latin American tour.

Oddly, he’ll be missing Carnival, which went down last week.

In Case You Missed It:  Disgraced Democrat Corrine Brown Running For Office Again After Serving Prison Time For Fraud
Posted in Tyranny and tagged Democrats, Obama.

The Muslim Brotherhood, with the complicity of the Obama administration, has infiltrated the U.S. government at the highest levels and...