Nine liberal Democrats have found something they agree with Republicans on: President Barack Obama’s authorization of military strikes on Libya without congressional consent is unconstitutional. Even the ultra liberal filmmaker Michael Moore slammed President Obama in a string of tweets for taking military action in Libya. Moore compared the U.S. military’s mission in Libya to Iraq and Afghanistan in several Twitter messages sent Saturday. 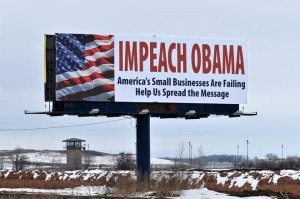 Those Democrats join GOP critics, including Sen. Richard Lugar of Indiana, ranking Republican on the Senate Foreign Relations Committee, and tea party favorite Sen. Rand Paul of Kentucky. And Democratic Rep. Dennis Kucinich of Ohio even suggested that Obama’s action could be an “impeachable offense.”

Sen. Paul points out that Article 1, Section 8 of the Constitution says “Congress shall have power to declare war.”

“It is alarming how casually the administration talks about initiating acts of war, as though Article 1 Section 8 of the Constitution does not exist,” the freshman senator says in a statement on his congressional website.
“Frankly, it is not up to the president whether or not we intervene in Libya, or set up ‘no-fly’ zones, or send troops. At least, it is not if we follow the Constitution.”

Obama has no authority to launch military attacks under the War Powers Resolution, Paul argues, because the United States has not been attacked.

“This is not our fight,” he adds. “If the administration wants to make it our fight, let them make their case before Congress and put it to a vote. I would strongly oppose such a measure, but that is the proper way to proceed.”

Rep. Roscoe Bartlett of Maryland, a senior Republican on the House Armed Services Committee, echoes Paul’s view. “The United States does not have a King’s army,” he said in a statement Monday. “President Obama’s unilateral choice to use U.S. military force in Libya is an affront to our Constitution.”

And Sen. John Cornyn of Texas, chairman of the National Republican Senatorial Committee, tweeted on Sunday that the president is treating Congress as a “potted plant.”

On the Democratic side, nine liberal House members “strongly raised objections to the constitutionality of the president’s actions” during a Democratic Caucus conference call Saturday, two Democratic congressmen who took part told Politico.

One of the nine Democrats, Rep. Kucinich, has publicly issued the strongest criticism of Obama. “President Obama moved forward without Congress approving. He didn’t have congressional authorization. He has gone against the Constitution, and that’s got to be said,” Kucinich told Raw Story in an interview on Monday.

That doesn’t mean Obama should in fact be impeached and removed from office, Kucinich said. “That’s a whole separate question. But we have to clearly understand what this Constitution is about.”

Kucinich now says he plans to offer up a measure that would defund U.S. efforts in Libya.

Another Democrat, Sen. Jim Webb of Virginia — a former Marine and Navy secretary — complained on Monday on MSNBC that Congress has “been sort of on autopilot for almost 10 years now, in terms of presidential authority, in conducting these types of military operations absent the meaningful participation of the Congress.”

As an Illinois senator and presidential candidate, Obama himself strongly stated that the president can’t authorize military action without congressional approval unless it’s necessary to stop an imminent attack on the United States.

In a December 2007 interview, a Boston Globe reporter asked Obama under what circumstances the president would have the constitutional authority to bomb Iran without first seeking authorization from Congress.

“The president does not have power under the Constitution to unilaterally authorize a military attack in a situation that does not involve stopping an actual or imminent threat to the nation,” Obama responded.

But apparently his view has changed. On Monday, Obama sent Congress a letter stating that as commander-in-chief, he has constitutional authority to authorize the Libya strikes, which were made in concert with our allies. The White House also noted that Obama met with congressional leaders to consult about the Libya situation Friday.

National Security Adviser Tom Donilon, asked about Obama’s 2007 statement, said the administration “welcomes the support of Congress in whatever form that they want to express that support,” according to The New York Times.

But he insisted Obama could authorize the action on his own. “This is a limited — in terms of scope, duration and task — operation, which does fall in the president’s authorities,” Donilon said.

Most constitutional scholars agree that our founding fathers purposely separated the power to decide to start a war from the power to conduct it. But since the Korean War, presidents of both parties have ordered military action without going to Congress first.

The split between presidents’ actions over the last 60 years and the Constitution’s text makes it difficult to conclude whether the attack on Libya is lawful, constitutional experts tell The Times.

On the budget front, the attacks on Libya could erase much of the budget cuts Republicans pushed through Congress recently.

GOP leaders say those reductions have totaled $285 million a day since March 1. But defense analysts tell The Hill that the Libya action could be draining the Defense Department of more than $100 million per day.

“We are working on cost estimates,” Pentagon spokeswoman Cheryl Irwin said. For now, the Defense Department is “cash flowing the Libyan operations out of funding available under the [2011] continuing resolution.”
Sen. Lugar says his colleagues should discuss the cost issue.

“Congress has been squabbling for months over a budget to run the federal government for a fiscal year that is almost half over,” he said in a statement Monday. “We argue over where to cut $100 million here and there from programs many people like. So here comes an open-ended military action with no end game envisioned.”

Heritage in Focus: Anniversary of Obamacare

This week marks the first anniversary of Obamacare, and already some of the less egregious aspects of the law have...