A senior member of al Qaida urged Libyan rebels to continue their fight against Muammar Gaddafi and warned of the consequences of defeat, in a videotaped message posted on Jihadi websites, the Qatar-based Gulf News reported on Sunday. 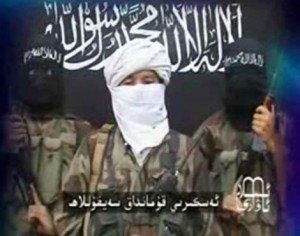 The message from Libya native, Abu Yahya al-Libi, marked the first time a top ranked al Qaida commander had commented on the uprising in Libya. Gaddafi has repeatedly blamed al Qaida for inciting the unrest against him.

“The Libyan people have suffered at the hands of Gaddafi for more than 40 years … He used the Libyans as a testing ground for his violent, rambling and disgusting thoughts,” Abu Yahya stated.

He warned that “Retreating will mean decades of harsher oppression and greater injustices than what you have endured.”

Abu Yahya also accused the West, and the US in particular, of having supported oppresive Arab regimes at the expense of the people.

The taped message could not be independently authenticated, according to the Gulf Times report.

An assault on Libya’s rebel-held city of Misrata was stalled on Sunday by renewed fighting between members of Muammar Gaddafi’s security forces, rebels said, but the government denied reports of a mutiny.

Residents said fighting broke out on Saturday after some units of the Libyan leader’s force refused to attack Misrata, Libya’s third-biggest city and the only place in the west of the country still openly defying Gaddafi’s rule.

The reports of a mutiny could not be verified because Libyan authorities have not allowed reporters access to the city of 300,000 which is 200 km (130 miles) east of the capital.

“From the early morning they (the security forces) are fighting among each other. We hear the fighting,” Mohammed, one of the rebel fighters, told Reuters by telephone on Sunday.

“This division between them came to us from God. Just when we thought the end was coming, this happened. Now we are waiting to see what will happen.”

Asked about reports of a mutiny in Misrata, government spokesman Mussa Ibrahim said: “This is rubbish. It is not true.”

“The army has surrounded the centre of Misrata. They are in the city. Tribal elders are talking to them (the rebels) to surrender,” he said in Tripoli.

Misrata residents said they could hear the sound of heavy fighting from a military airfield to the south of the town, where pro-Gaddafi forces have been based. They said there were no clashes between rebels and security forces on Sunday.

“They (Gaddafi’s forces) are still fighting each other. The shelling hit a house and a shop in southern Misrata, I don’t know whether there are any casualties,” said rebel spokesman Gemal.

He said shops in the city were open as normal, but added: “Of course there is tension as everybody is waiting to see what will happen.”