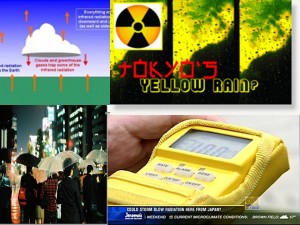 Radioactive yellow rain that fell in Tokyo and surrounding areas last night caused panic amongst Japanese citizens and prompted a flood of phone calls to Japan’s Meteorological Agency this morning, with people concerned that they were being fed the same lies as victims of Chernobyl, who were told that yellow rain which fell over Russia and surrounding countries after the 1986 disaster was merely pollen, the same explanation now being offered by Japanese authorities.

“After two days of rain in Tokyo I woke up to a thick coating of this yellow stuff all over my car. What looks like a glare between the glass and the body of the car is actually pollen. My first thought was ewe! Radioactive sludge from Fukushima, but no,” states the comment associated with this You Tube clip.

“The (Japan Meteorological) agency received more than 200 inquiries Thursday morning about yellowish residue left on roofs and elsewhere by the rain, stirring concerns that radioactive substances had fallen after accidents caused by the March 11 quake and tsunami at a nuclear power plant around 220 kilometers northeast of Tokyo,” reports Japan Today.

Officials later suggested the discoloration was caused by air-borne pollen falling with the rain. “The JMA believes the yellow patches are pollen, but has yet to confirm this,” reports the Wall Street Journal, adding that the JMA received over 280 calls after residents in the Kanto region discovered yellow powder on the ground.

“A health official at the Tokyo metropolitan government also said there is a possibility that the rain contained radioactivity but not at a level to have had adverse effects on people’s health,” adds the Japan Today report.

Given the fact that Japanese authorities have been habitually deceptive about the Fukushima crisis from start to finish, assurances that the yellow powder was merely a result of air-borne pollen particles are dubious at best. With people living in Tokyo already being told that tap water is unsafe to drink, along with contaminated vegetables and milk from certain areas near Fukushima, the fact that they were panicked by yellow rain is unsurprising.

Although pollen can turn rain a yellow color, the fact that the phenomenon occurred a couple of hundred kilometers south of the radiation-spewing Fukushima nuclear plant has stoked alarm, and understandably so given the fact that victims of Chernobyl nuclear fallout in 1986 were also told by authorities that yellow rain was harmless pollen, when in fact it was deadly radioactive contamination.

A University of California Daily Bruin article entitled “Remembering Chernobyl,” documents how children in Belarus happily splashed around in puddles of yellow rain having been assured by Russian authorities that it was merely pollen, when in fact it was a toxic mixture of radioactivity that had been blasted from the Chernobyl plant 80 miles away.

Thinking back to 20 years ago, it’s the splashing in yellow rainwater that Antonina Sergieff vividly recalls.

“We all jumped in the puddles with the yellow stuff. … You don’t see (it in) the air, it doesn’t materialize. But when you see the yellow dust, you see radiation,” Sergieff said.

When these elements first reached Sergieff 20 years ago, they came in the form of yellow rain.

It was not long after that residents in her hometown knew it wasn’t simply “pollen” – which is what government officials assured them, she said.

The effects of this “pollen” soon confirmed that those puddles of yellow rain contained something far more sinister, namely iodine-131, caesium-137, strontium-90 and plutonium-239.

“Soon, people started losing their hair, pictures of deformed animals sprouted up in independent newspapers, and incidences of cancer in Belarus skyrocketed, Sergieff said. According to the U.N. brief, cases of breast cancer in Belarus doubled between 1988 and 1999, among other increases.”

With levels of radiation emitted by Fukushima now approaching those spewed out by the blast at Chernobyl, as the establishment media bizarrely pretends that the crisis is all but over, seawater samples taken around 330 meters south of the plant confirm that levels of radioactive iodine released are the highest yet recorded.

As we have highlighted, despite UN and World Health Organization studies that claim Chernobyl led to a maximum of 9,000 deaths and 200,000 cases of radiation sickness, more contemporary studies have shown that nearly a million people have been killed from cancers caused by the disaster over the course of the last 25 years.

In Case You Missed It:  Pizza Hut transforms BOOK IT! Program into trans-pushing gender-bender destruction of children
Posted in Freedoms and tagged Japan.

ITALY- Abdel-Hakim al-Hasidi, the Libyan rebel leader, has said jihadists who fought against allied troops in Iraq are on the...