Administration spokespeople continuously claim “no threat” from the radiation reaching the US from Japan, just as they did with oil hemorrhaging into the Gulf. Perhaps we should all whistle “Don’t worry, be happy” in unison. A thorough review of the science, however, begs a second opinion. 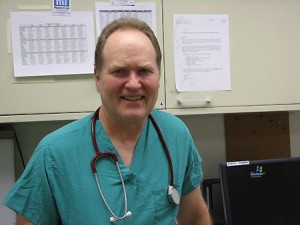 That the radiation is being released 5,000 miles away isn’t as comforting as it seems. The Japanese reactors hold about 1,000 times more radiation than the bombs dropped over Hiroshima..1 Every day, the jet stream carries pollution from Asian smoke stacks and dust from the Gobi Desert to our West Coast, contributing 10 to 60 percent of the total pollution breathed by Californians, depending on the time of year. Mercury is probably the second most toxic substance known after plutonium. Half the mercury in the atmosphere over the entire US originates in China. It, too, is 5,000 miles away. A week after a nuclear weapons test in China, iodine 131 could be detected in the thyroid glands of deer in Colorado, although it could not be detected in the air or in nearby vegetation..2

The idea that a threshold exists or there is a safe level of radiation for human exposure began unraveling in the 1950s when research showed one pelvic x-ray in a pregnant woman could double the rate of childhood leukemia in an exposed baby.3 Furthermore, the risk was ten times higher if it occurred in the first three months of pregnancy than near the end. This became the stepping-stone to the understanding that the timing of exposure was even more critical than the dose. The earlier in embryonic development it occurred, the greater the risk.

A new medical concept has emerged, increasingly supported by the latest research, called “fetal origins of disease,” that centers on the evidence that a multitude of chronic diseases, including cancer, often have their origins in the first few weeks after conception by environmental insults disturbing normal embryonic development. It is now established medical advice that pregnant women should avoid any exposure to x-rays, medicines or chemicals when not absolutely necessary, no matter how small the dose, especially in the first three months.

“Epigenetics” is a term integral to fetal origins of disease, referring to chemical attachments to genes that turn them on or off inappropriately and have impacts functionally similar to broken genetic bonds. Epigenetic changes can be caused by unimaginably small doses – parts per trillion – be it chemicals, air pollution, cigarette smoke or radiation. Furthermore, these epigenetic changes can occur within minutes after exposure and may be passed on to subsequent generations. 456

The Endocrine Society, 14,000 researchers and medical specialists in more than 100 countries, warned that “even infinitesimally low levels of exposure to endocrine-disrupting chemicals, indeed, any level of exposure at all, may cause endocrine or reproductive abnormalities, particularly if exposure occurs during a critical developmental window. Surprisingly, low doses may even exert more potent effects than higher doses.”7 If hormone-mimicking chemicals at any level are not safe for a fetus, then the concept is likely to be equally true of the even more intensely toxic radioactive elements drifting over from Japan, some of which may also act as endocrine disruptors.

Many epidemiologic studies show that extremely low doses of radiation increase the incidence of childhood cancers, low birth-weight babies, premature births, infant mortality, birth defects and even diminished intelligence.8 Just two abdominal x-rays delivered to a male can slightly increase the chance of his future children developing leukemia.9 By damaging proteins anywhere in a living cell, radiation can accelerate the aging process and diminish the function of any organ. Cells can repair themselves, but the rapidly growing cells in a fetus may divide before repair can occur, negating the body’s defense mechanism and replicating the damage.

Comforting statements about the safety of low radiation are not even accurate for adults.10 Small increases in risk per individual have immense consequences in the aggregate. When low risk is accepted for billions of people, there will still be millions of victims. New research on risks of x-rays illustrate the point.

Radiation from CT coronary scans is considered low, but, statistically, it causes cancer in one of every 270 40-year-old women who receive the scan. Twenty year olds will have double that rate. Annually, 29,000 cancers are caused by the 70 million CT scans done in the US.11,12  Common, low-dose dental x-rays more than double the rate of thyroid cancer. Those exposed to repeated dental x-rays have an even higher risk of thyroid cancer.13

Even properly functioning nuclear plants emit a steady stream of radiation into nearby water and atmosphere, which can be inhaled directly or ingested from soil contact, plants or cows milk. Many studies confirm higher rates of cancers like childhood leukemia, and breast and thyroid cancer among people who live in the same counties as nuclear plants, and among nuclear workers.3

Beginning with Madam Curie, the story of nuclear power is one where key players have consistently miscalculated or misrepresented the risks of radiation. The victims include many of those who worked on the original Manhattan Project, the 200,000 soldiers who were assigned to eye witness our nuclear tests, the residents of the Western US who absorbed the lion’s share of fallout from our nuclear testing in Nevada, the thousands of forgotten victims of Three Mile Island or the likely hundreds of thousands of casualties of Chernobyl. This could be the latest chapter in that long and tragic story when, once again, we were told not to worry.

In Case You Missed It:  Report: Biden Administration Has Spent $3 Billion On Migrant Facility Contracts
Posted in Freedoms and tagged California, Health And Human Services, Japan, United Socialist States of America, US Citizen.