By Fjordman (Norway) – The WND commentator Vox Day has this to say about the use of immigration for the purposes of subversion and colonization: 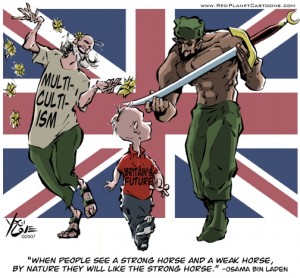 Throughout history, when an occupying power has wanted to destabilize and destroy a nation, it has settled a foreign people in its midst. The seeds of the Balkan conflict were sown when the Turks planted Albanian Muslims in Kosovo to uproot the Christian Serbs who had long defended the borders of medieval Christendom and had more than once turned back the tide of an expanding Ottoman empire. The Soviet Union under Stalin methodically encouraged Russian emigration into the occupied Baltic states in a campaign of long-term Russification, to such an extent that nearly 30 percent of the populations of Latvia and Estonia were Russian.

Here is what I wrote three years ago. The same principles apply to North America:

Multiculturalism is simply a tool for divide and conquer. Is there then any point in trying to comprehend its logic at all? Maybe it was just a convenient excuse used for disrupting the established order of nation states by flooding them with mass immigration under the cover of “cultural diversity” or historical inevitability. If that is the case, there never was any coherent logic behind it, so we shouldn’t waste our time looking for one. Many of those promulgating it never believed a word of it themselves. Multiculturalism is the new Allah: Don’t understand, just obey.
– – – – – – – – –
This was undertaken by a coalition of different groups with a shared goal of undermining Western nation states. I heard supporters of mass immigration a generation ago state that all this talk about how it would change our societies into the unrecognizable was scare-mongering and racism. Now, the same groups are saying that yes, our societies have been changed forever. It’s good, and it’s anyway too late to do anything about it, so get used to it! Their propaganda was used to deceive the public and keep it off balance in order to implement potentially irreversible changes with little real debate. They knew they would never get the permission to destroy their own countries, so they simply didn’t ask.

By dismantling national borders, the EU has facilitated the largest migration waves in European history. When Poland became a member, many Poles moved to Britain, Germany etc. This left Poland with a labor shortage. They are now considering importing workers from the Ukraine and Russia to compensate for the Poles that left. At the same time, native Brits are fleeing to Spain because they don’t feel at home in Britain anymore. By such moves, you unleash a chain migration that will eventually smash nation states that have existed for ages. Yet this intra-European migration pales in comparison to the immigration from developing nations. The end result will — supposedly — be an entire continent of people without any national loyalties who will be divided, disoriented and thus presumably easier to control. Stalin did the same thing, moving large population groups around to unsettle the state and keep it disunited. The EU has learned a lot from Stalin.

by Dr. Nicolai Sennels “But she’s asking for it! She knows I’ll beat her if she says things like that....