You might be a little freaked out about 11,500 tons of radioactive water being dumped into the Pacific Ocean in Japan, where workers are still scrambling to stabilize an earthquake-crippled nuclear power plant called Fukushima Daiichi. In fact, the words “radiation” and “nuclear” give many people the creeps. 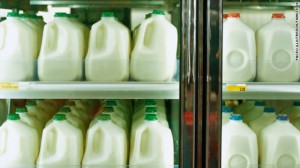 And that’s partly because these are concepts that you aren’t too familiar with; take a minute to learn the basics here. When you get down to the actual risks involved in the Japan nuclear disaster, things aren’t so bad for the general public.

It’s true that radioactive particles from a nuclear disaster like this do get into the food supply, so far there’s no indication that there’s cause for alarm just yet. The particles emitted from the Fukushima Daiichi nuclear power plant bind to dust, which is how they travel through the air and eventually fall on the ground, according to CNN’s chief medical correspondent Dr. Sanjay Gupta.

When cows eat contaminated grass, those particles can get into milk. Large surfaces of leafy veggies are at risk because they present a greater surface area for the particles to fall on; that’s why several green vegetables can no longer be exported from certain areas near the nuclear power plant. Still, levels detected so far pose little risk, Gupta said. And so far there is no contamination of beef in Japan, the Japanese government claimed Friday.

Radioactive particles disperse the farther they travel, so by the time they get to the United States from Japan they are not believed to be concentrated enough to pose any health risk. The state of Washington and California have both reported low levels of radioactivity in milk; however, this milk is safe to consume, or so the “experts” say.

And how about what that water might do to fish? If you’re still craving sushi, it seems that, unlike after the Gulf oil disaster, there isn’t as much concern about the safety of fish from Japan, Eatocracy reports. Fishing in the prefectures near to the nuclear plant – Fukushima, Miyagi and Iwate – has been suspended since the March 11 earthquake and tsunami, which makes it less likely that tainted fish will reach the market.

But there is justified concern for the health of the Japanese workers who are struggling to control Fukushima Daiichi, and getting exposure to doses of radiation far higher than the general public. While they are probably not experiencing any health effects right now, their long-term health should be monitored, experts say.

By Acharya S- Sometimes the obvious needs to be stated, especially when there is so much at stake. In this...