(CNSNews.com) – House Budget Chairman Congressman Paul Ryan (R-Wis.) said President Barack Obama’s budget strategy is to “do nothing, punt, duck, kick the can down the road” while the debt remains on track to eventually hit 800 percent of GDP. Ryan added that the CBO is saying it “can’t conceive of any way” that the economy can continue past 2037 given its current trajectory. 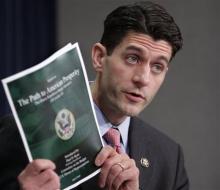 Ryan also said that the House Republicans’ FY2012 budget, which he unveiled yesterday, would save Medicare and help the United States avoid a debt crisis.

“It all comes down to this: Either you fix this problem now where we, you can guarantee people who’ve already organized their lives around these programs get what they have coming to them, or you pick the president’s path, which is do nothing, punt, duck, kick the can down the road, and then we have a debt crisis and then its pain for everybody,” said Ryan.

He continued, “So the question is, do we save these programs now by engaging in budget reform that preempts a debt crisis that gets this situation under control and gets this economy growing or do we worry about politics, do we worry about the next election and then by doing so, kick the can down the road, only to wake one day and see a real problem where you have to do indiscriminate cuts to everybody including senior citizens? We don’t want to have European austerity in this country, which is a debt-crisis-fueled cut to current seniors, tax increases on the current economy to slow us down.”

Ryan’s proposal, which cuts $5.8 trillion in government spending over the next decade, would provide Medicare beneficiaries with subsidies to purchase private insurance starting in 2022. The proposal would also end taxpayer support of Fannie Mae and Freddie Mac and provide no funding for the implementation of the health care reform law passed by Congress last March.

“I asked CBO to run the model going out and they told me that their computer simulation crashes in 2037 because CBO can’t conceive of any way in which the economy can continue past the year 2037 because of debt burdens,” said Ryan.
“So, we have to go out and give the country a choice,” he said. “We know the path the president’s put the country on. It’s a path that I fundamentally believe transforms this country into something it was never designed to be – into a cradle-to-grave social welfare state and economic stagnation.”

“We are offering a country that is true to this country’s founding principles that is prosperous, that is pro-growth, that lives within its means, that is an opportunity society with a sound, resilable safety net,” said Ryan.

Republicans on the House Administration Committee want to shore up voter registration rules in the wake of a Colorado study...