Clinton talked Israel into giving up the Gaza strip during his term. Netanyahu Spokesman Says War May Break Out Between Israel And Gaza As Early As Tonight.

The following news from BBC Newsfile crosses the tape: “The Ma’an News Agency website in Arabic at 1631 gmt on 7 April posts the following “urgent” caption: “[Ofir] Gendelman [spokesman for the office of Israeli Prime Minister Binyamin Netanyahu] Tells Ma’an: I do not rule out the possibility that Israel will wage war on Gaza tonight.” Or, more metaphorically, the proverbial flame in a fireworks store. Surely this last straw will send the S&P limit [up|down] until someone has the brilliant idea that Bernanke can print his way out of that one as well. 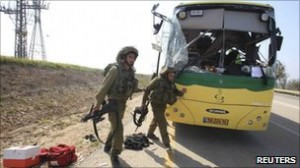 The Israeli bus was hit by a Hamas missile

israel said it had successfully used a new missile-defence system for the first time.

Two missiles fired from Gaza in the direction of the city of Ashkelon were destroyed in mid-flight by an Israeli interceptor missile.

The military wing of the Islamist Hamas movement said it carried out the bus attack. It said this was a response to the killing of three Hamas members in Israeli strikes earlier this week.

Reports say 45 mortars were fired from Gaza into Israel.

Following the bus attack, an Israeli plane bombed a compound in northern Gaza belonging to Hamas. Targets in Gaza City and Rafah were also hit.

Driving into Gaza City from the border, loud explosions could be heard. A huge plume of black smoke rose up to the north from an apparent Israeli air strike. Ambulances overtook us, speeding the injured to Shifa hospital.

This looks like another potentially dangerous escalation, and a reminder that the Gaza-Israel conflict has not gone away.

Militarily, Israel is far superior, a fact which is reflected in the casualty figures.

Both Hamas and Israel have recently said they wanted a return to calm. But both are under pressure from their constituents to act.

“We hope this situation will be contained but we will not shy away from taking all the necessary action, offensive and defensive, to protect our country and to protect our citizens,” said Mr Netanyahu during a visit to Prague.

Palestinian President Mahmoud Abbas urged Western powers to intervene, but also urged militants not to give Israel an excuse to hit Gaza.

Mr Abbas called on the West “to immediately intervene to stop this aggression”, the official Wafa news agency reported.

The US State Department condemned the Palestinian militants’ attack. Spokesman Mark Toner said there was “no justification of the targeting of innocent civilians.”

Earlier on Thursday, Israel carried out air strikes against smuggling in the south of the Gaza Strip.

As has been well documented, Obamacare is destructive to Americans on several fronts: economically, medically, Constitutionally, ethically, and otherwise. This...